Decorate for a Superhero Party using some DIY skills and a small budget!  Keep it simple and inexpensive by using boxes, balloons, and garland.  That’s all you need to make the perfect backdrop for your little superhero’s birthday party! 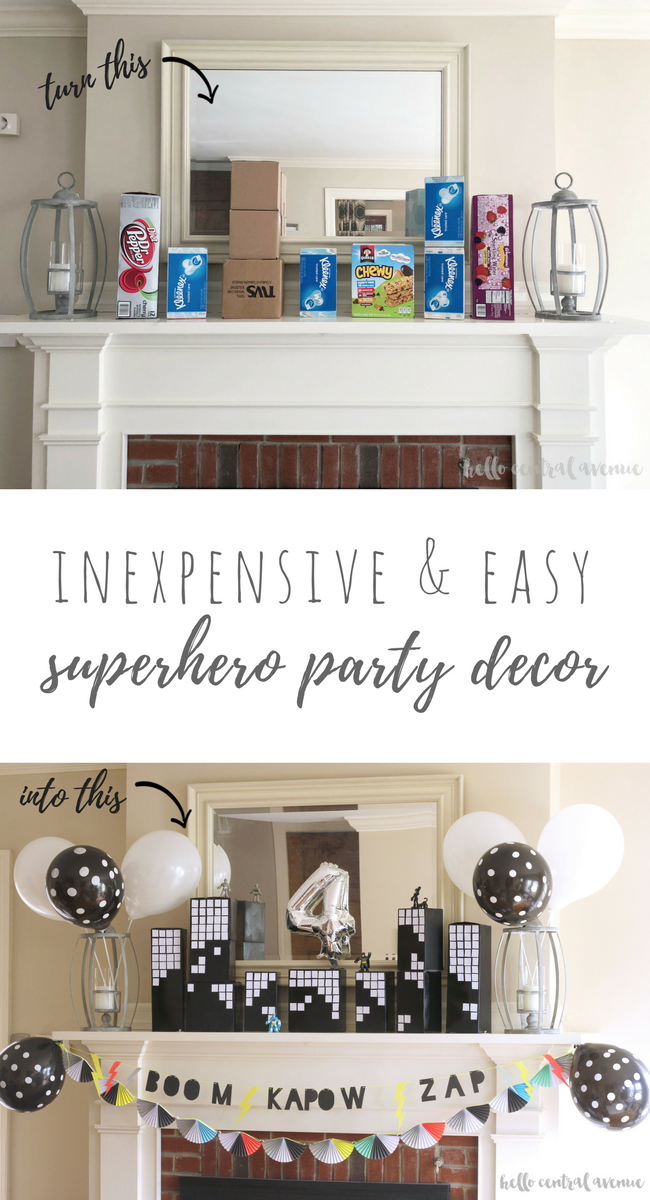 If you are looking for a simple, easy, and inexpensive way to decorate for a superhero party, look no further!  My son asked for a superhero party for his fourth birthday!  His birthday is on Valentine’s Day, but we hosted his family birthday party this past Saturday.  I needed a quick turnaround on mantle decorating, so I wanted something that was pretty easy to make and display.

Well, it doesn’t get much easier than this!  I started saving some boxes a couple of months ago in preparation for his birthday party.  I even had friends and family saving some boxes for me in case I didn’t have enough!  You can see the types of boxes that I used below.  I used the boxes in different parts of the house as well.  I’ll be sharing another blog post about my son’s entire superhero party soon, so be sure to check back! 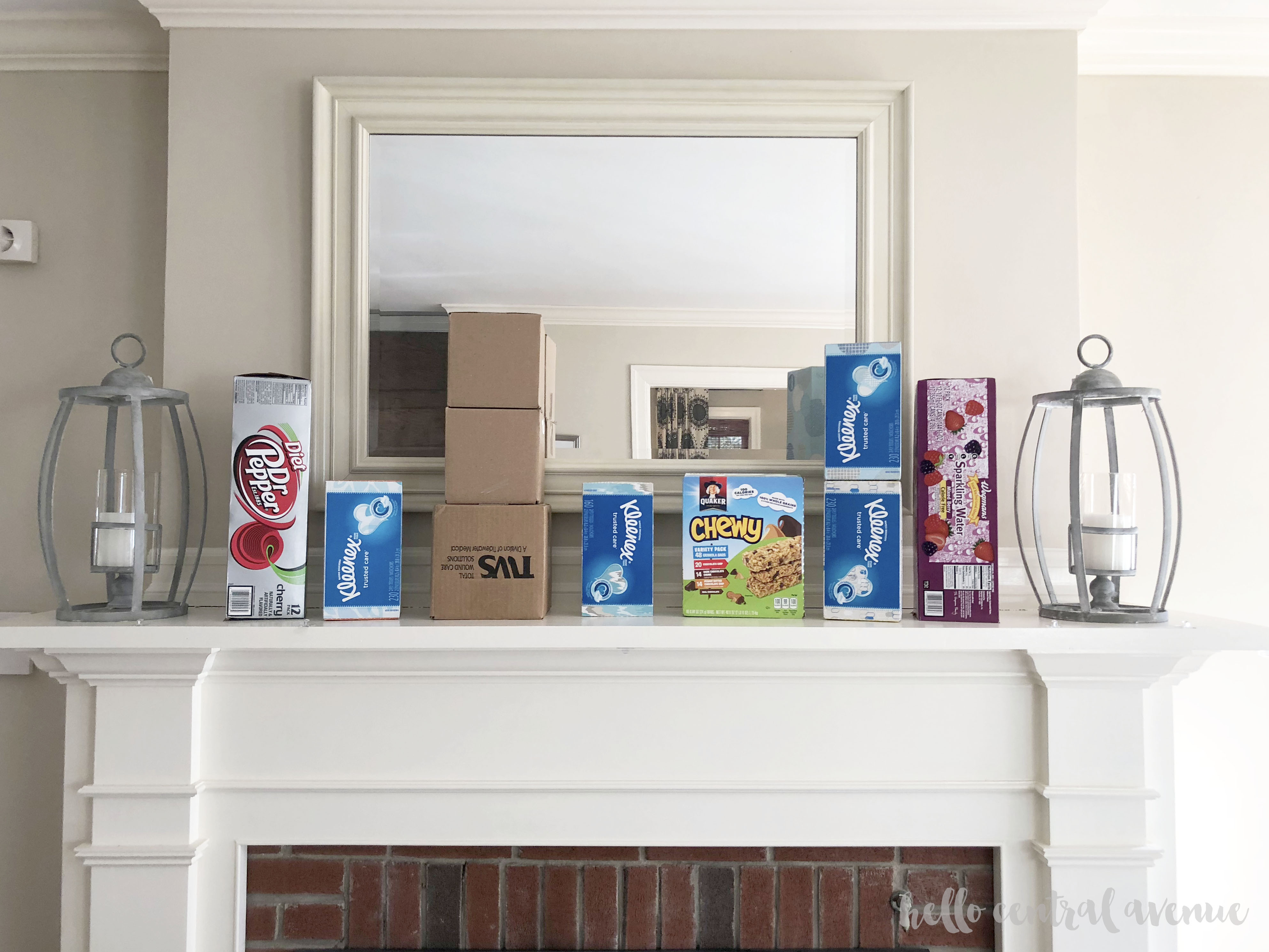 I had come up with the idea to paint some boxes black and paste some little white squares on them to create a superhero city!  I already had leftover black spray paint from another project, and I had plenty of white paper to create the windows.  Spraying the boxes took a few hours, because I had to let them dry in between coats, and pasting the white windows took some time.  If you have more time than just naptime and after bedtime, you could complete it even faster!  I added some of his little Fisher-Price Imaginext superhero guys to the city for a fun little detail!

I decided to keep my superhero party mantle monochromatic for the most part.  I wanted the garland to pop against the backdrop.  That is why I chose the black balloons with white polkadots and solid white balloons.  I bought the balloons at Party City.  They are available online, so you don’t need to leave the house!  I found the small silver “4” balloon there as well.  What’s cool about the “4” balloon is that you just blow it up yourself!  It looks like it’s filled with helium, but it’s not!

I used some balloon sticks that I had from Oriental Trading.  You can buy a pack of a bajillion!  By using the sticks, it gives the illusion that you have some helium filled balloons, but you don’t need to spend the extra money to actually get them filled.  The balloon sticks are great because they are reusable!

The superhero garland is my absolute favorite!  It was ridiculously inexpensive and came with three garlands in the pack!  Below you can see the other garland that comes in the pack.  I used it in the dining room.  I’ll be sharing that later!  I like that it is a little different than most of the superhero garlands you see out there.  I bought the garland from Shindigz.com.  This was the first time that I purchased something from their site.  The garlands are too cute!  They call it a superhero garland “kit,” because you have to put together the pinwheel garland.  I attached the garlands using some basic command hooks.  I don’t want to take them down! 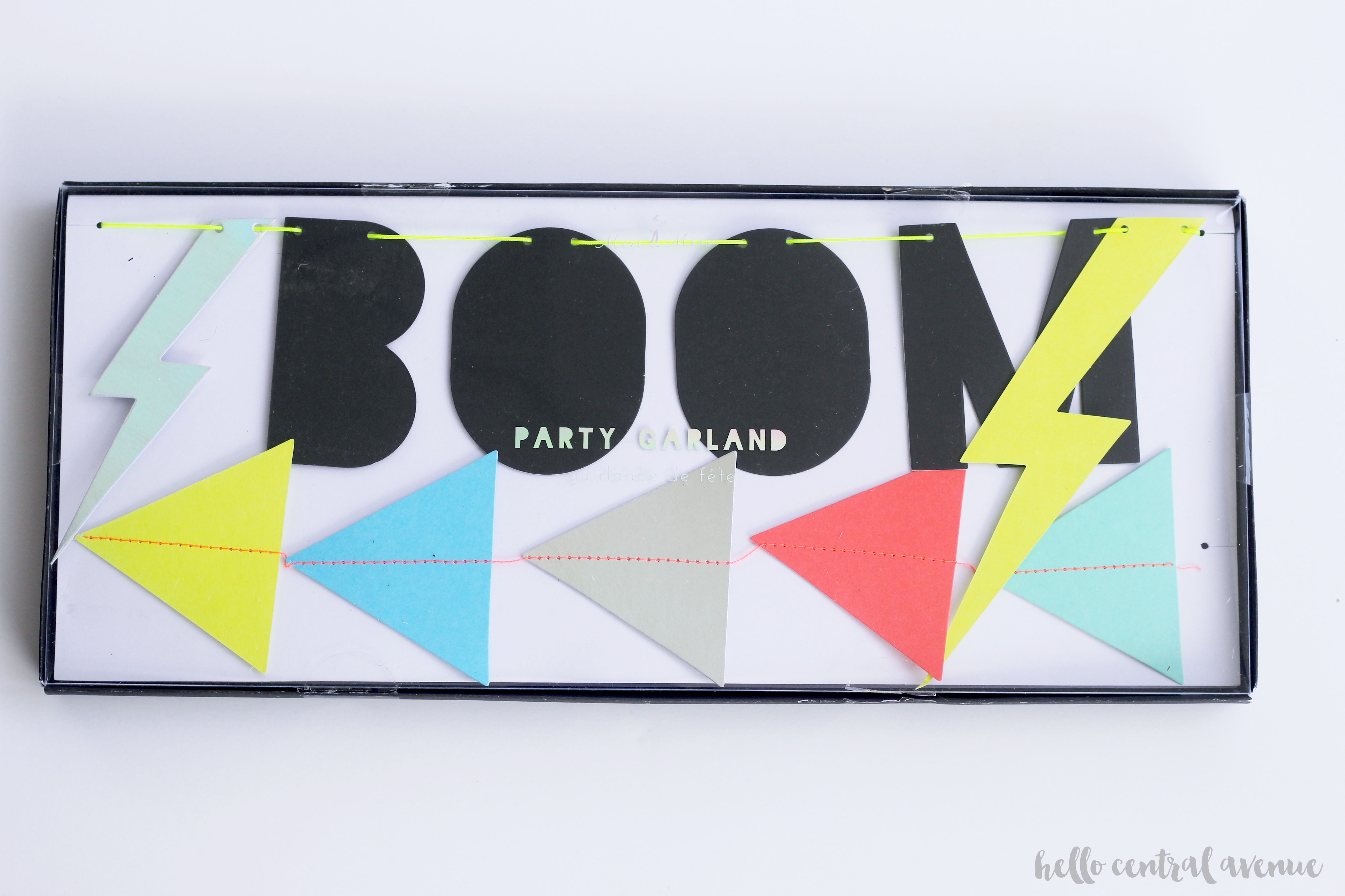 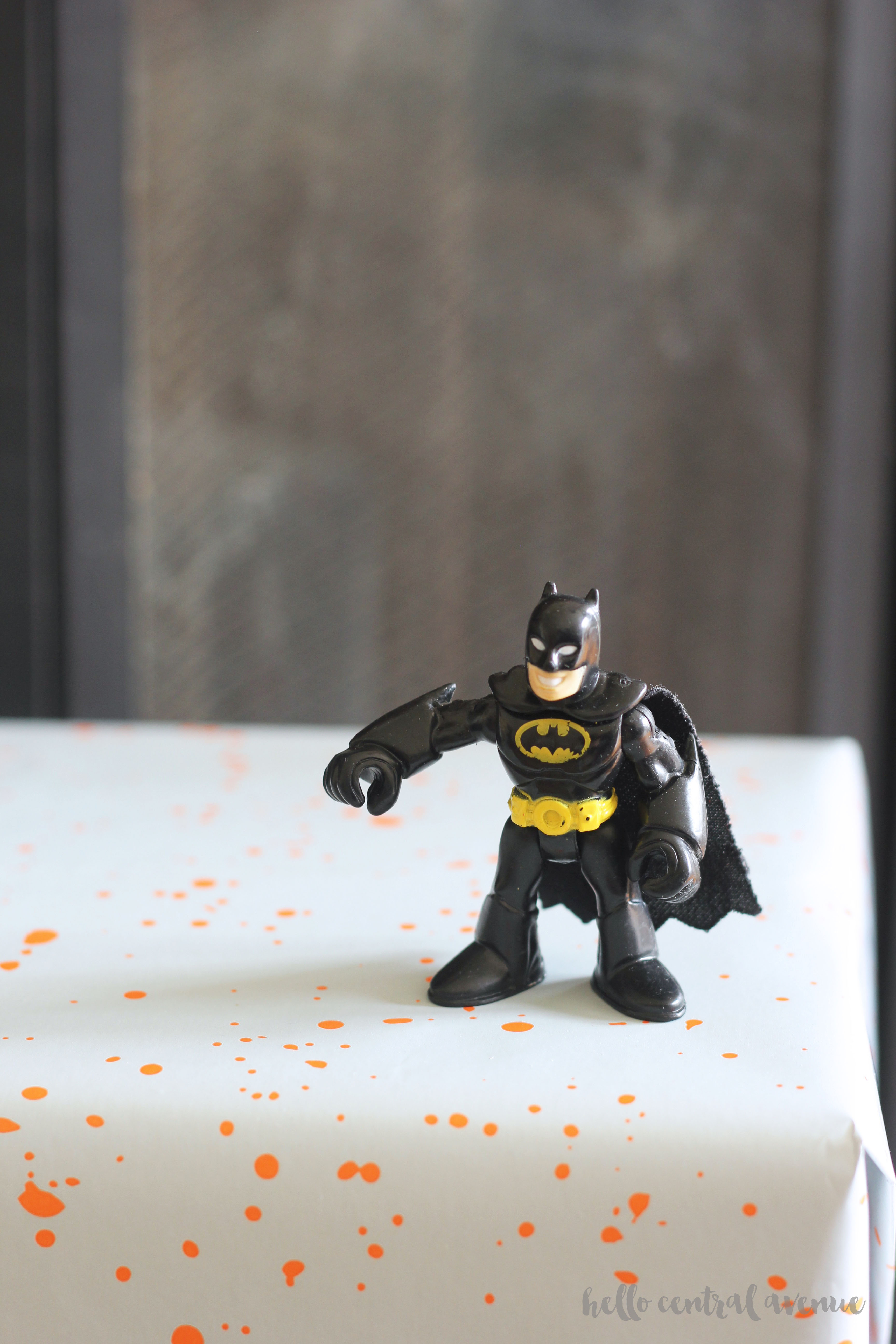 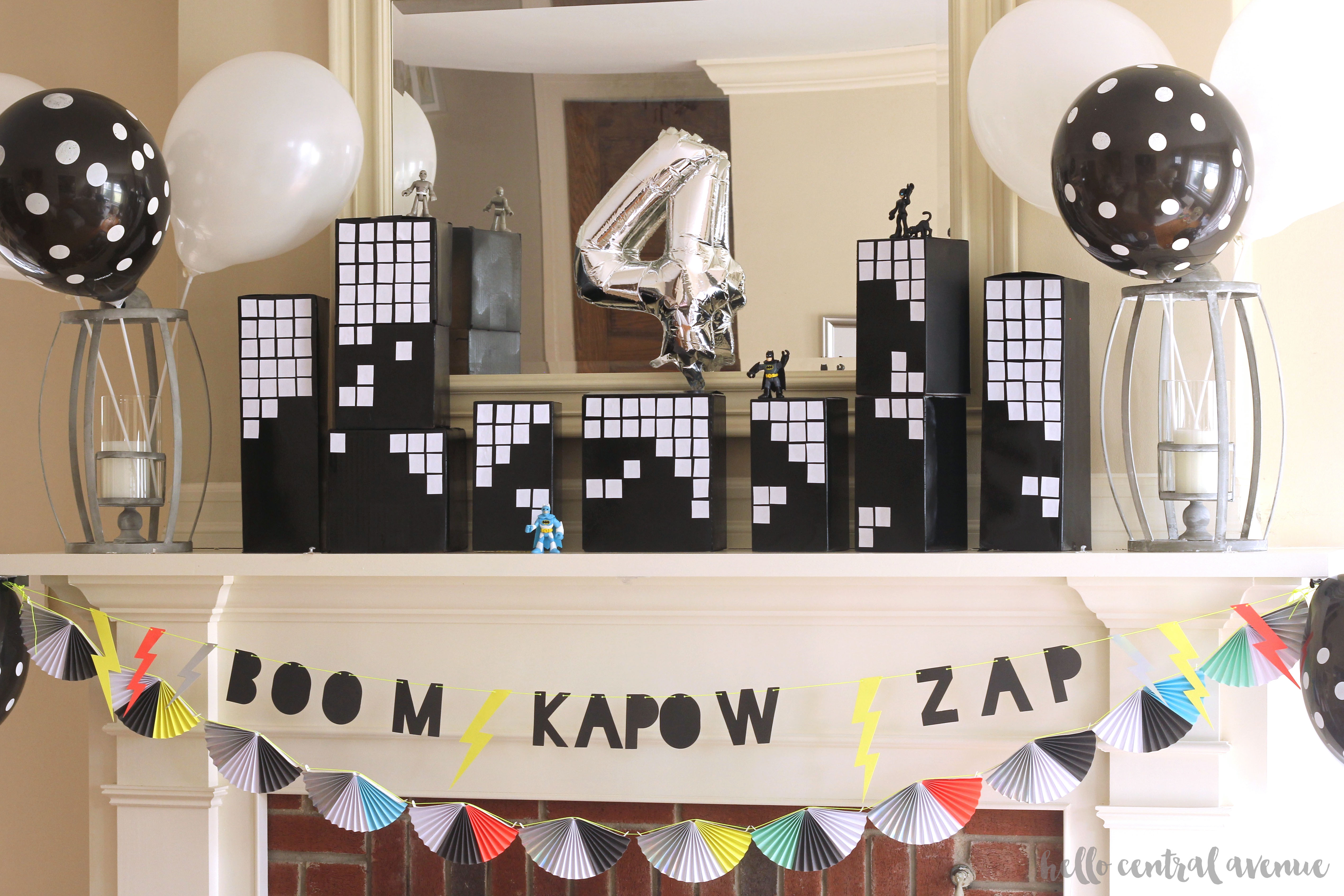 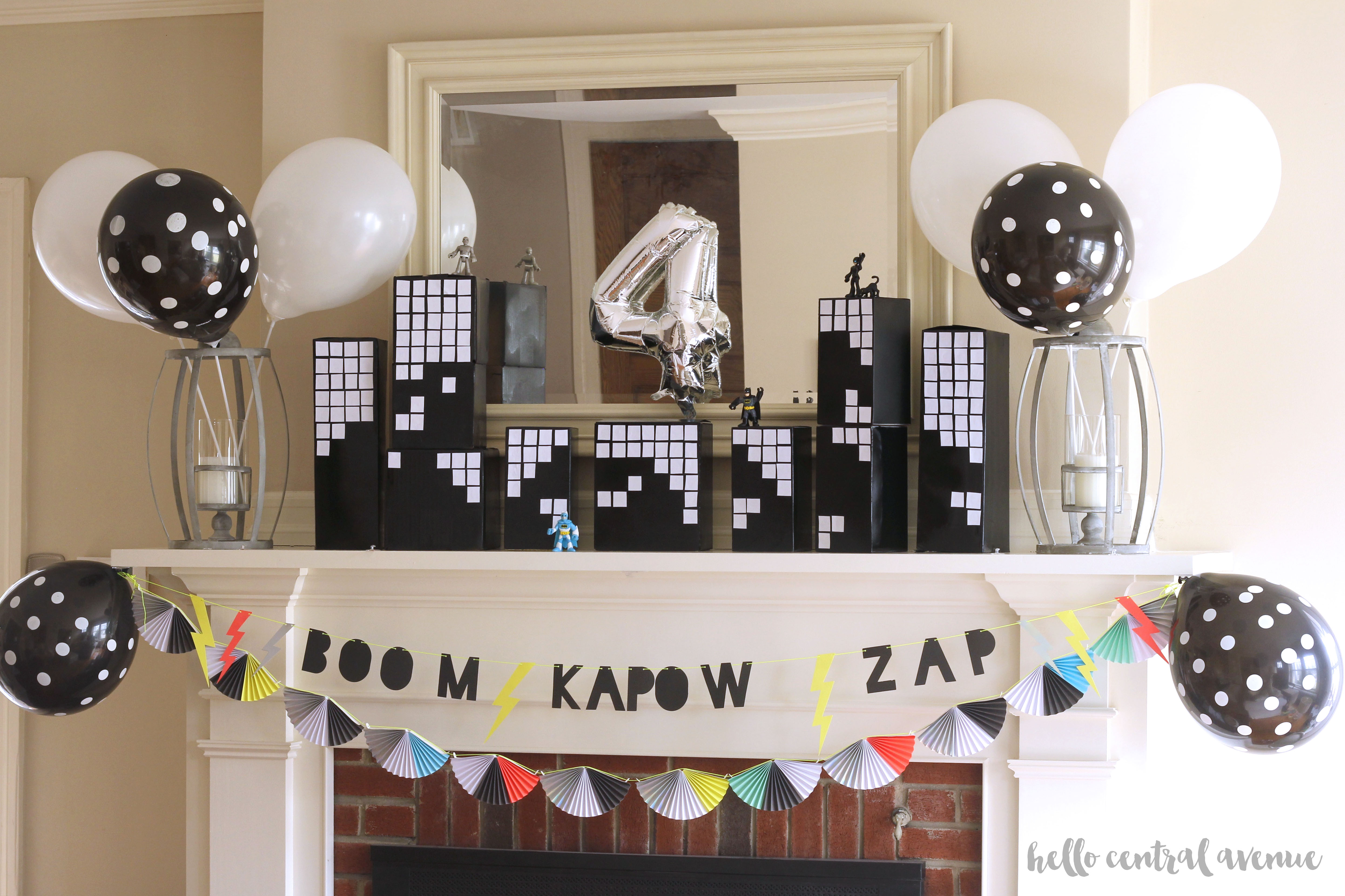 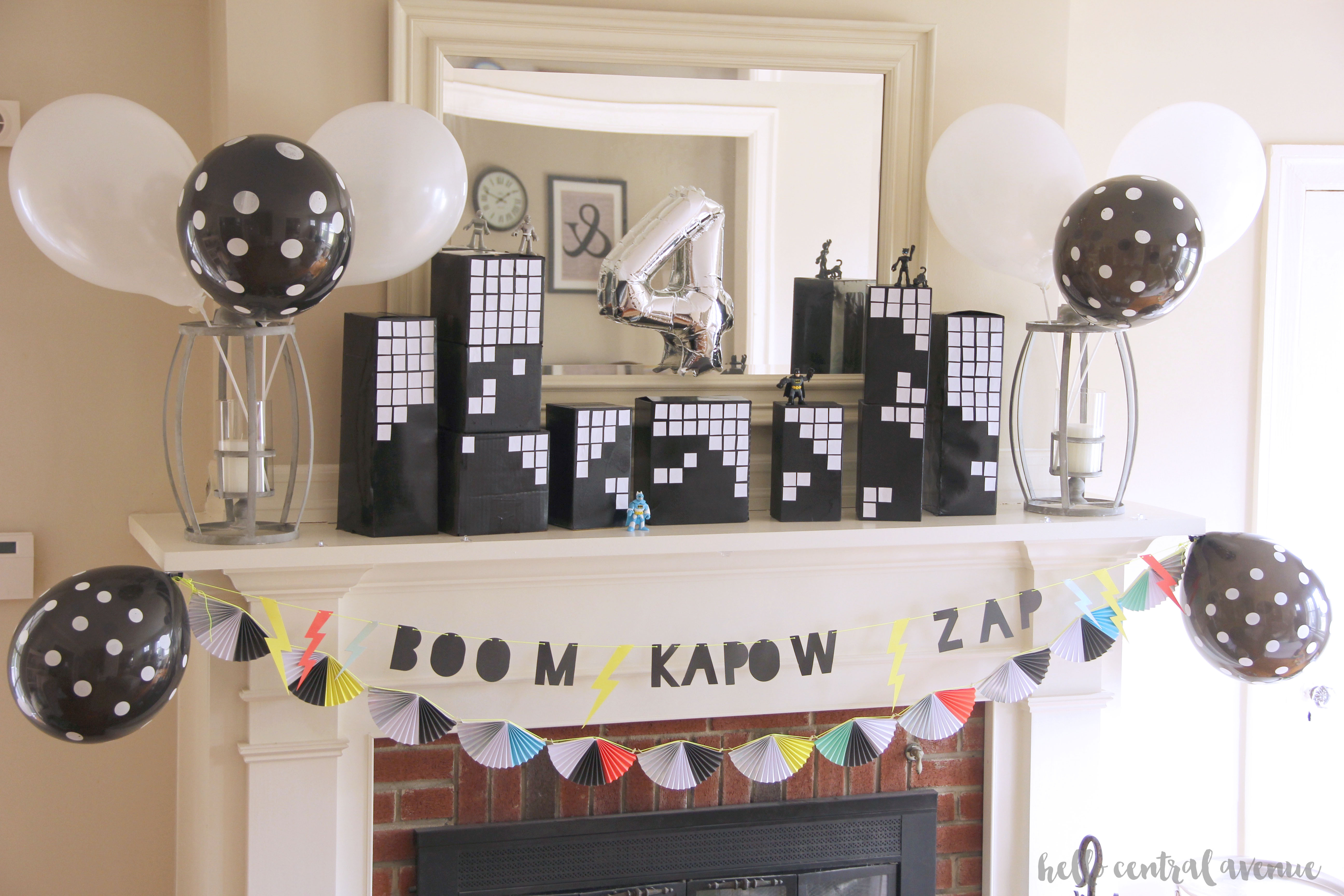 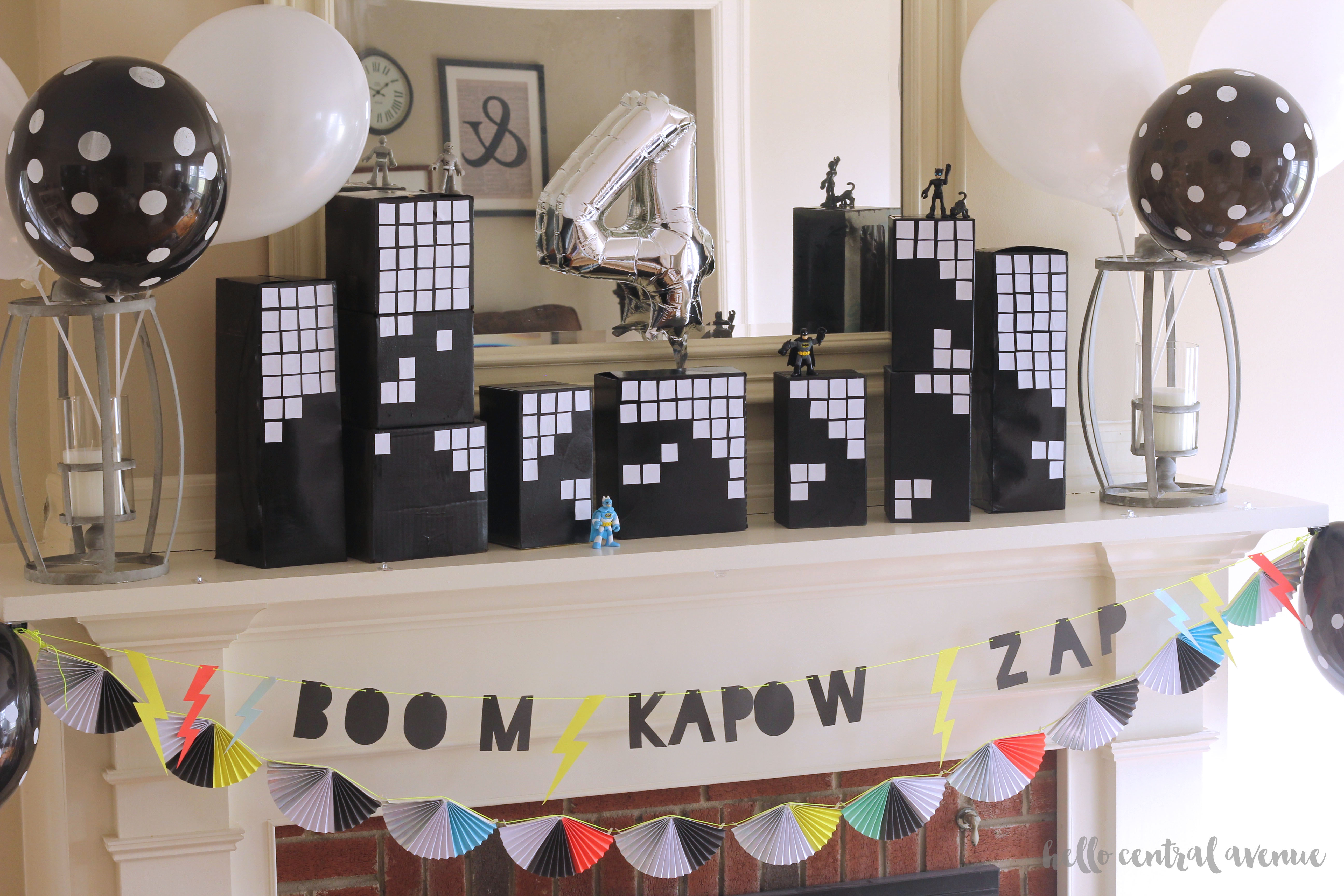 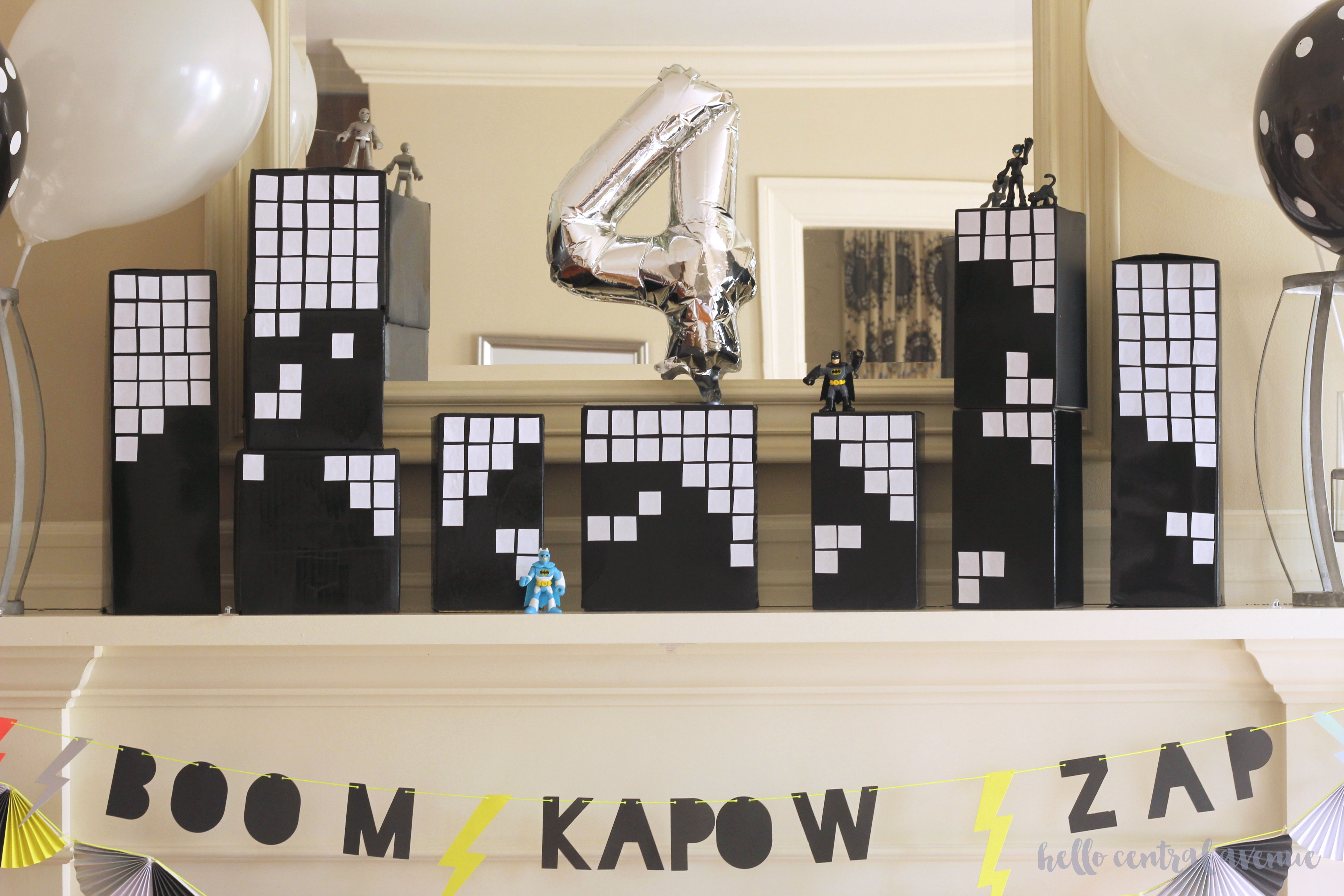 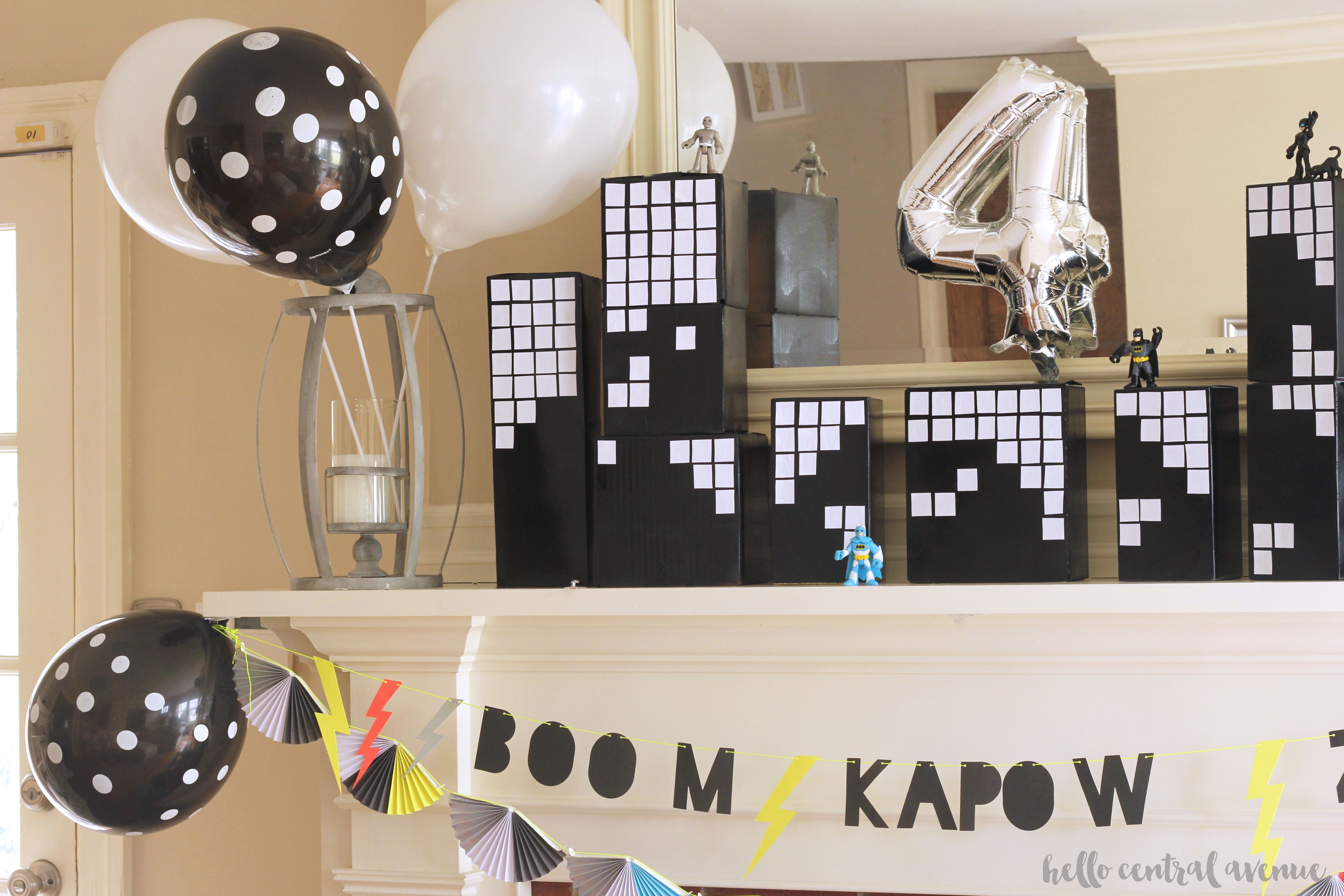 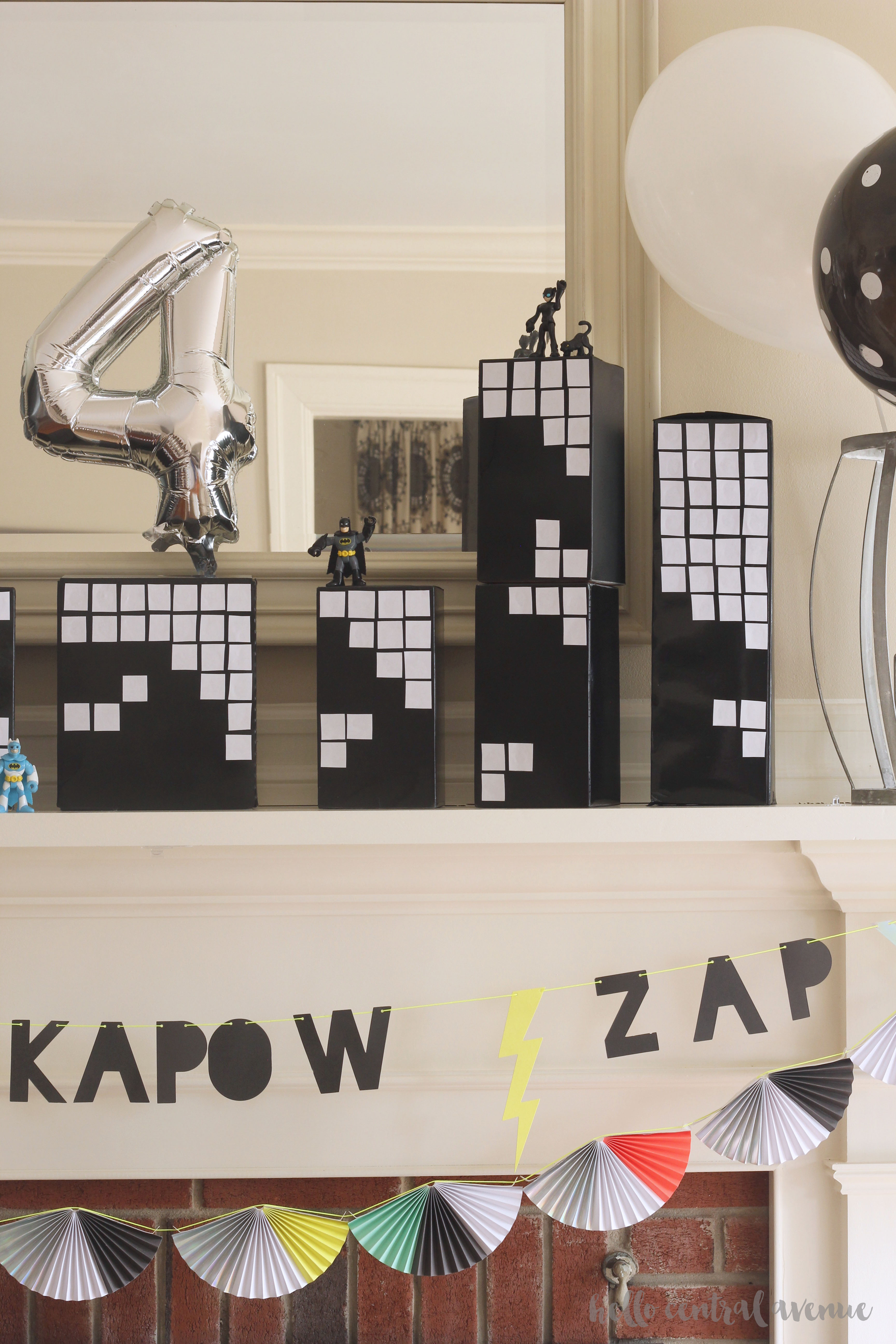 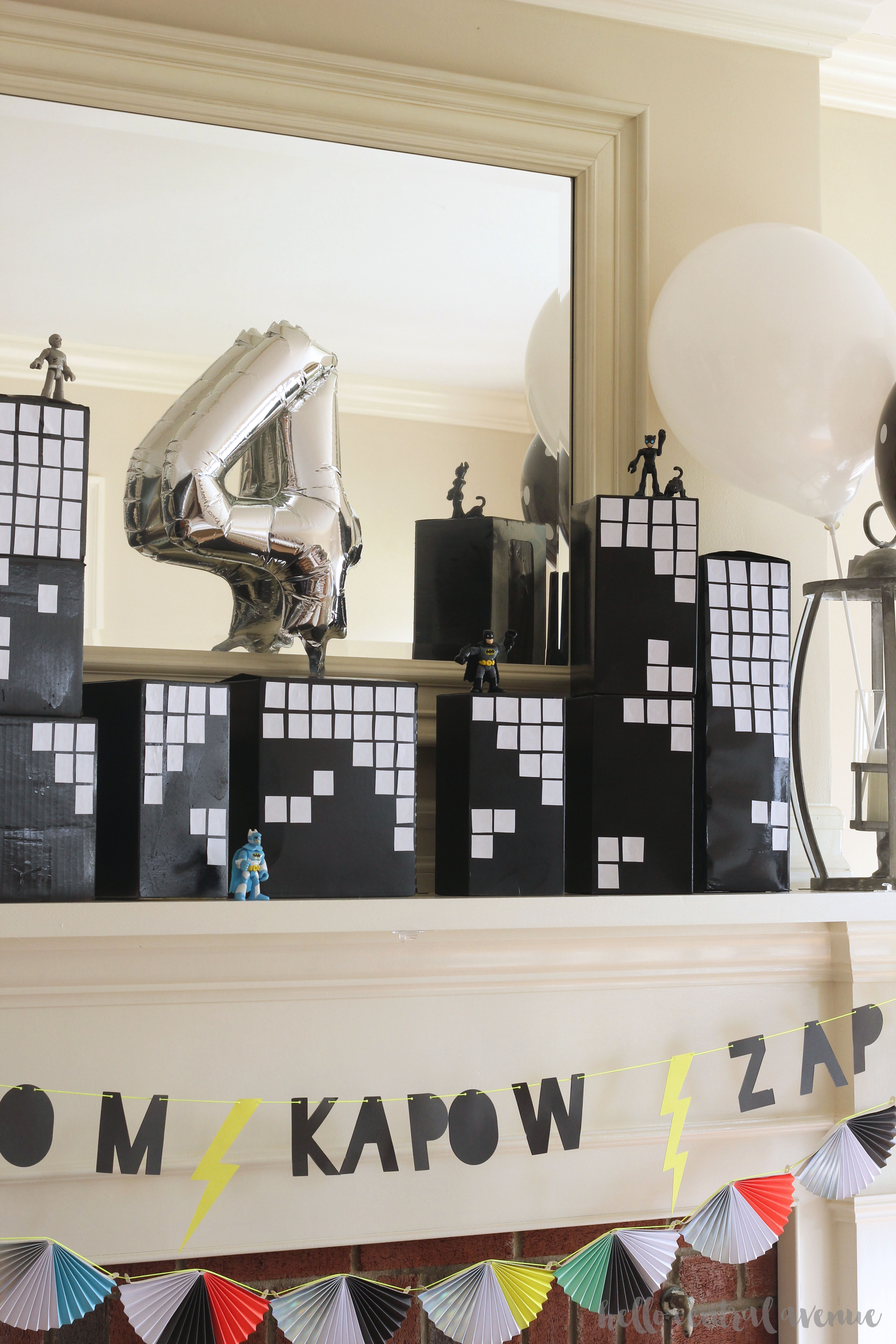 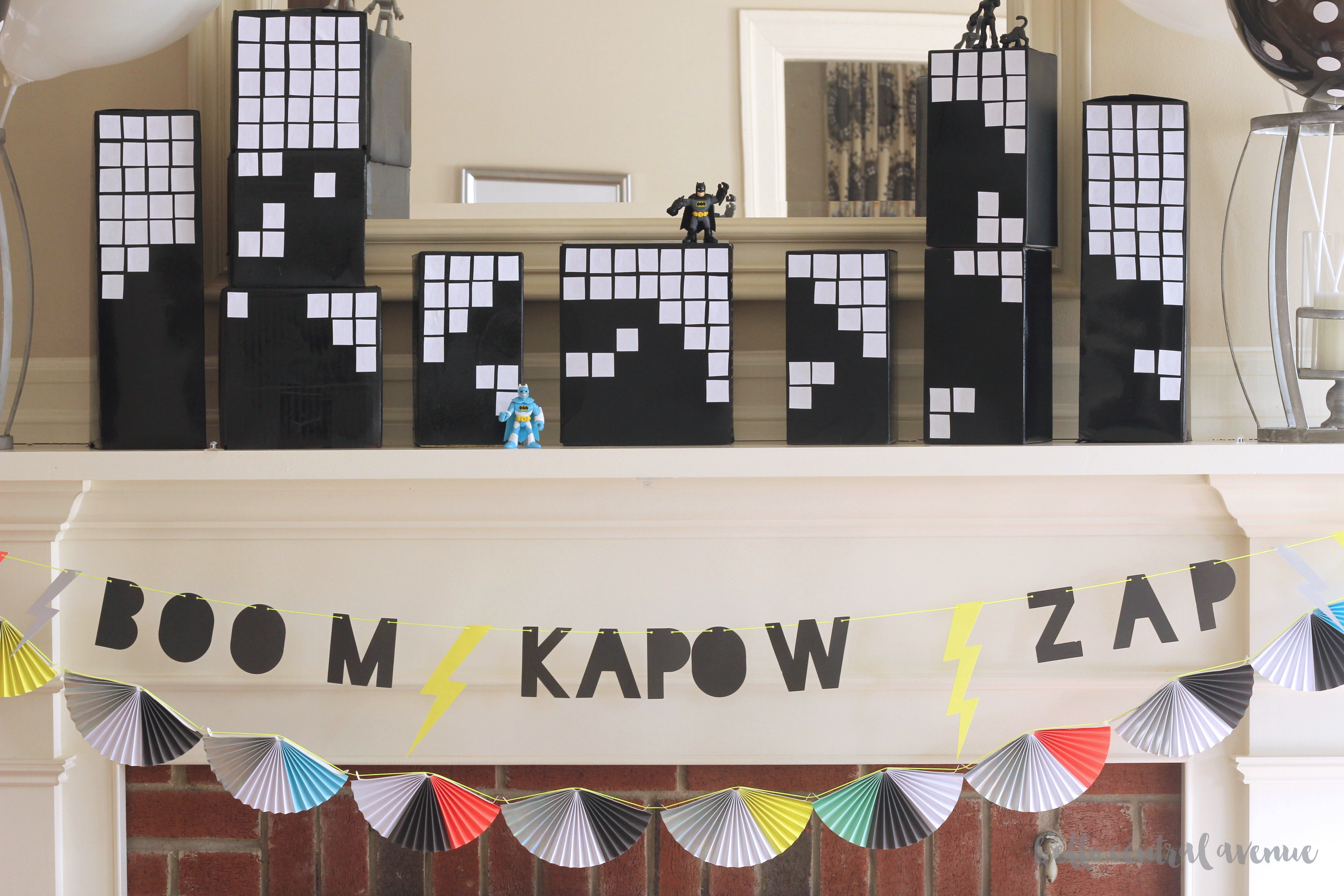 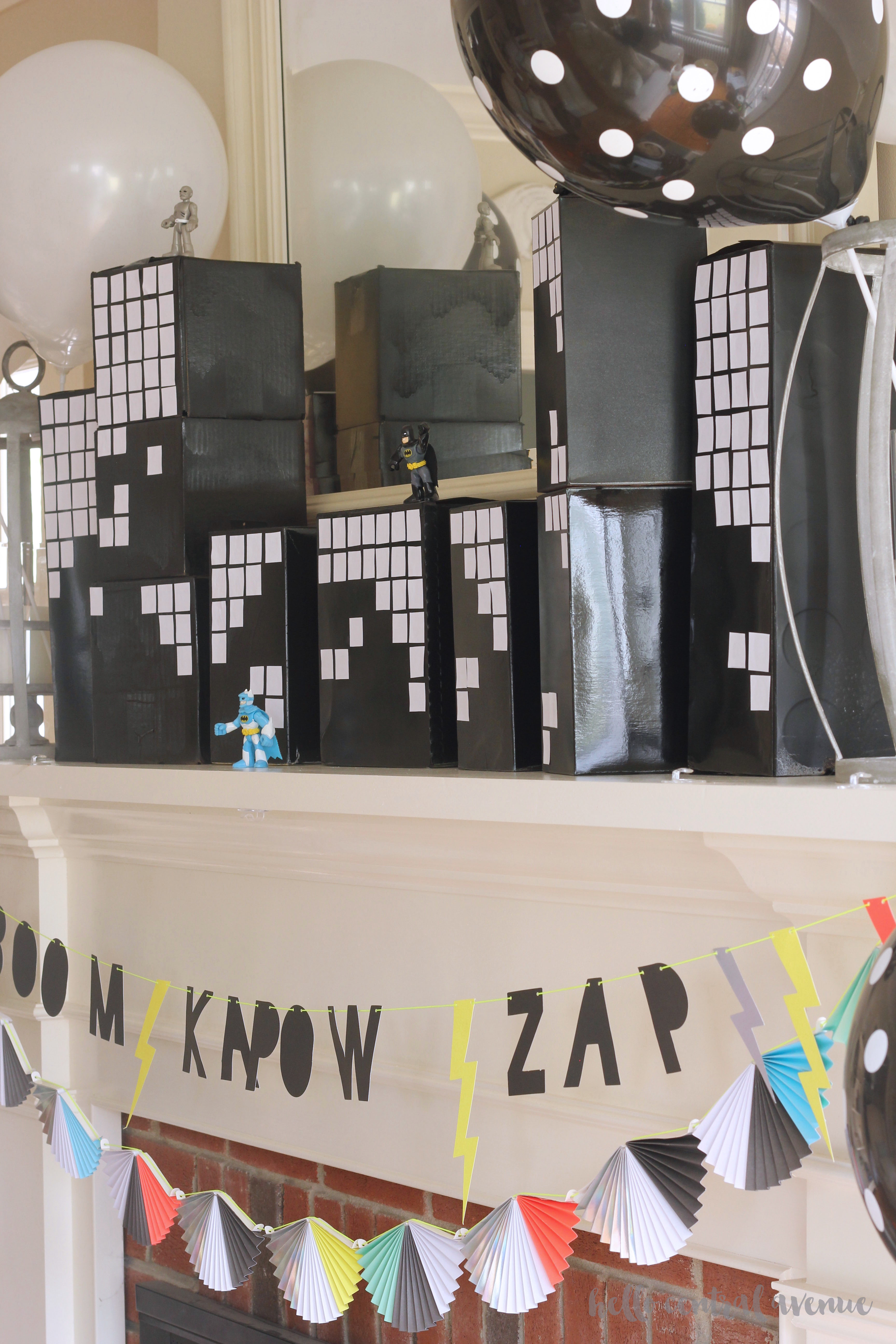 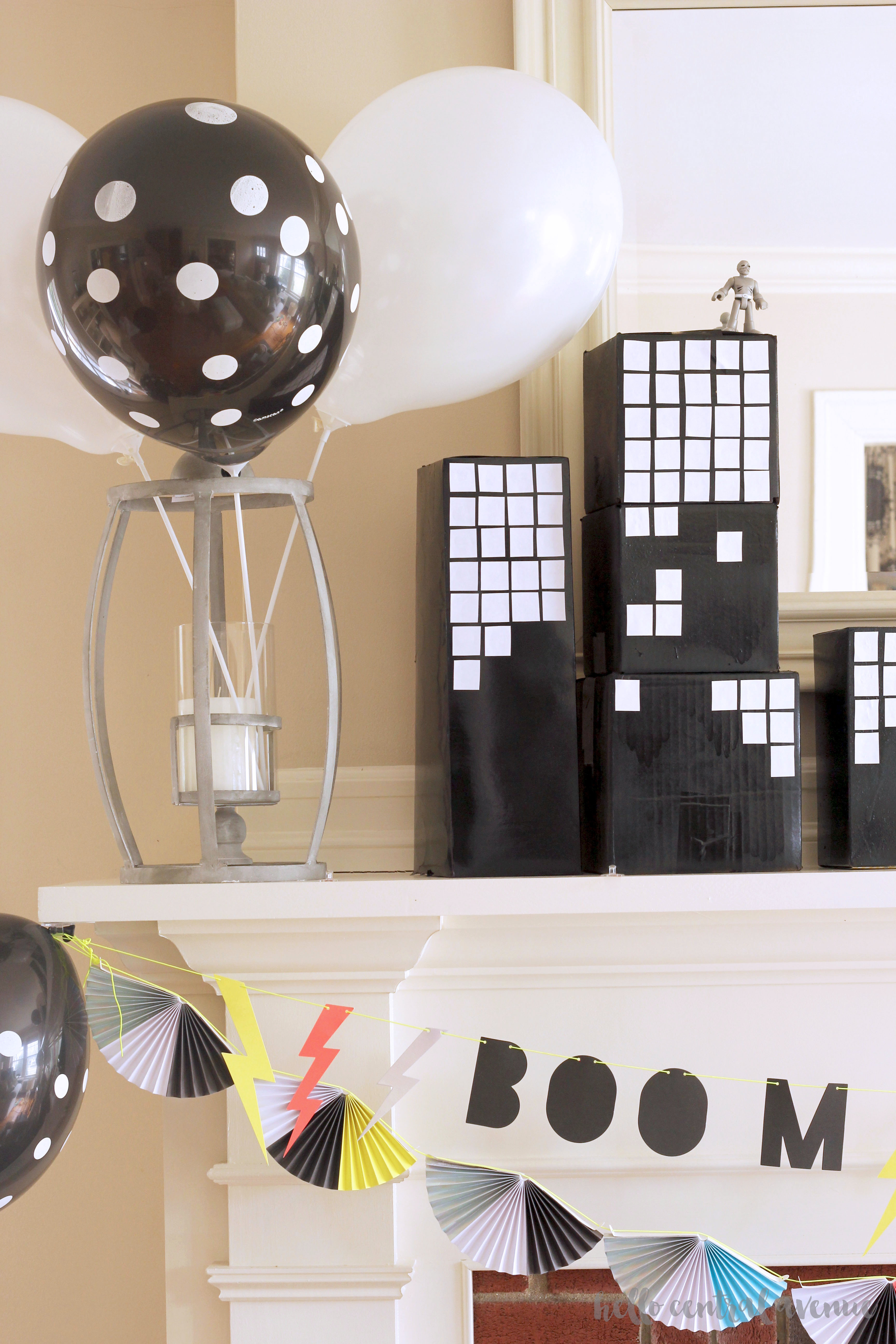 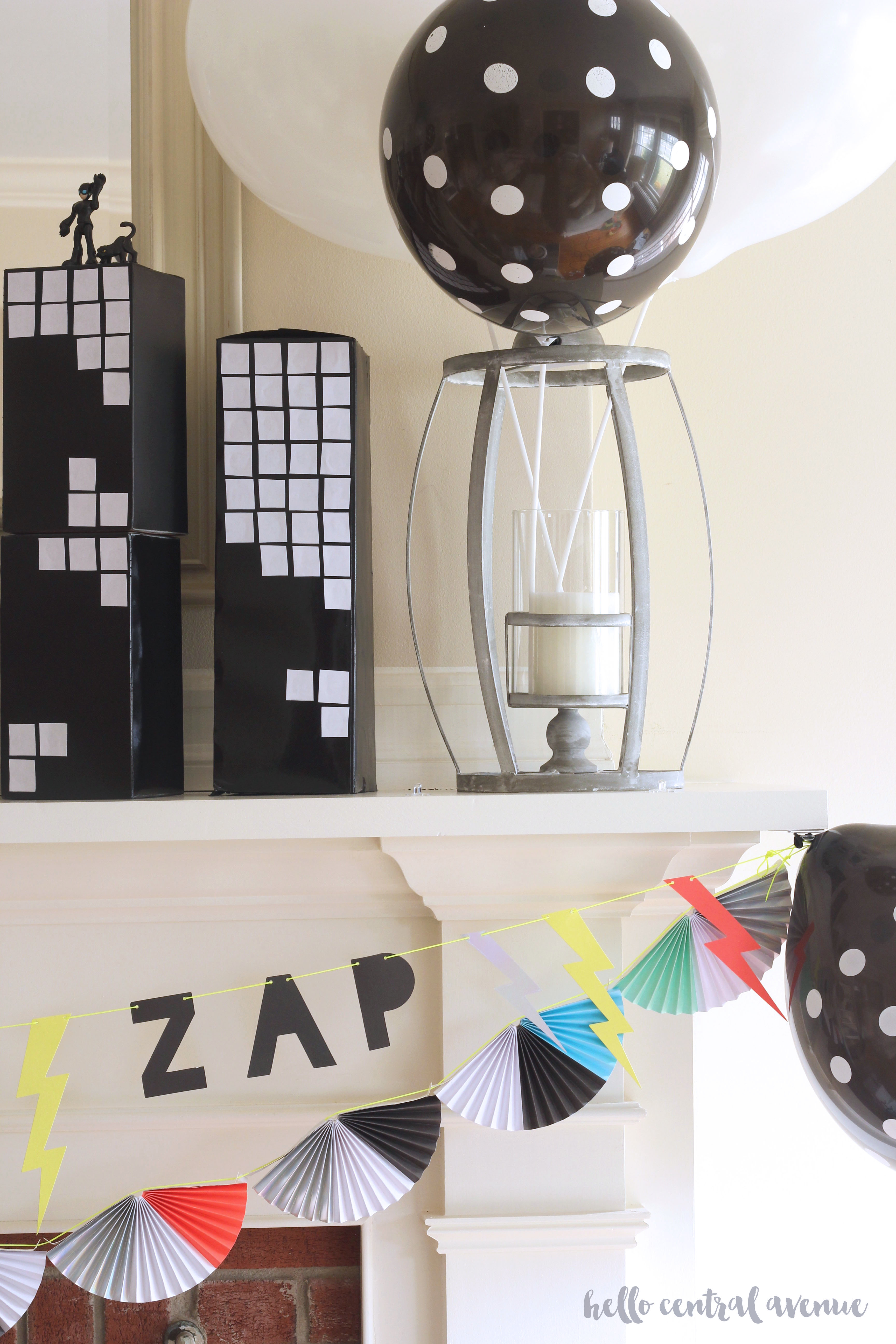 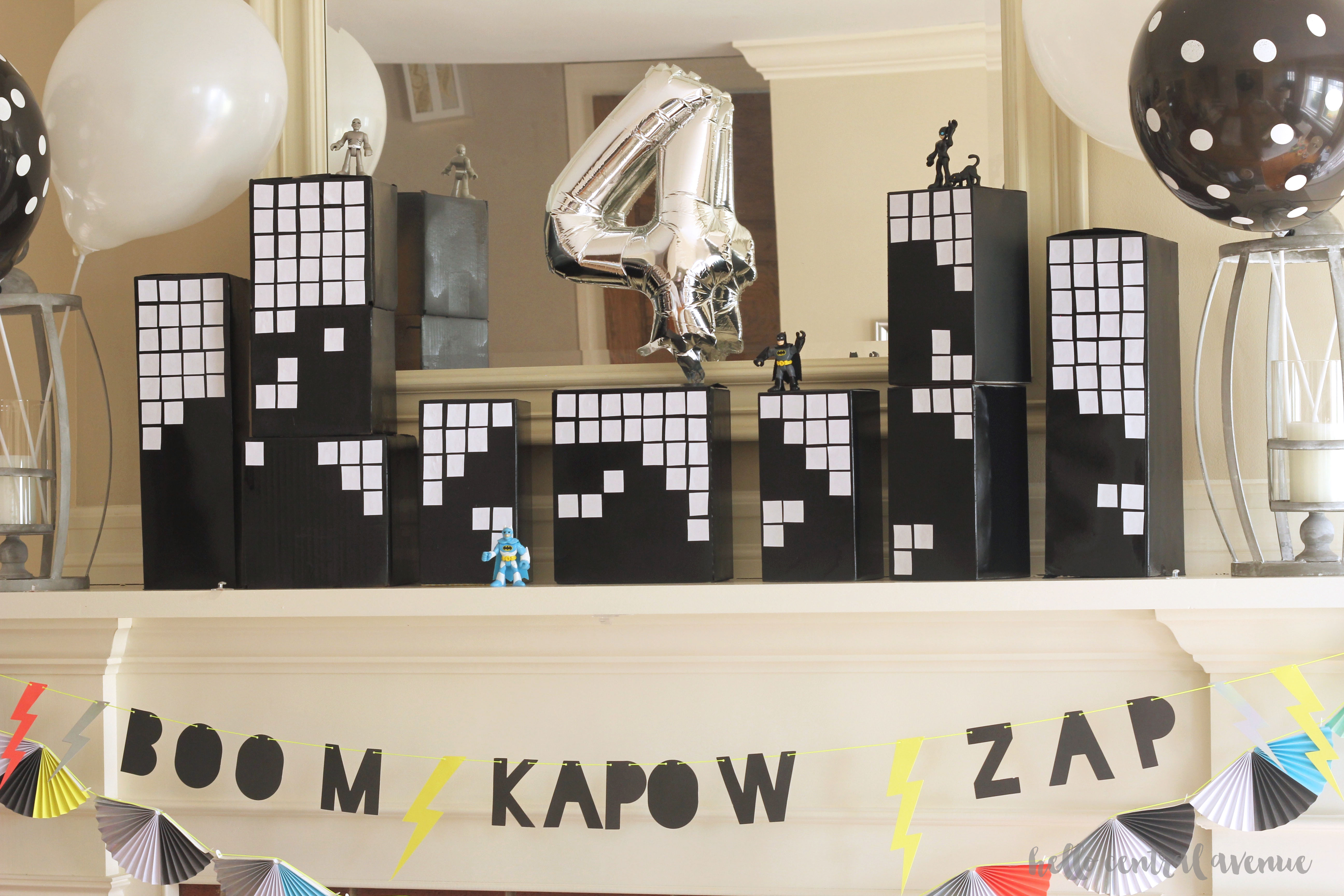 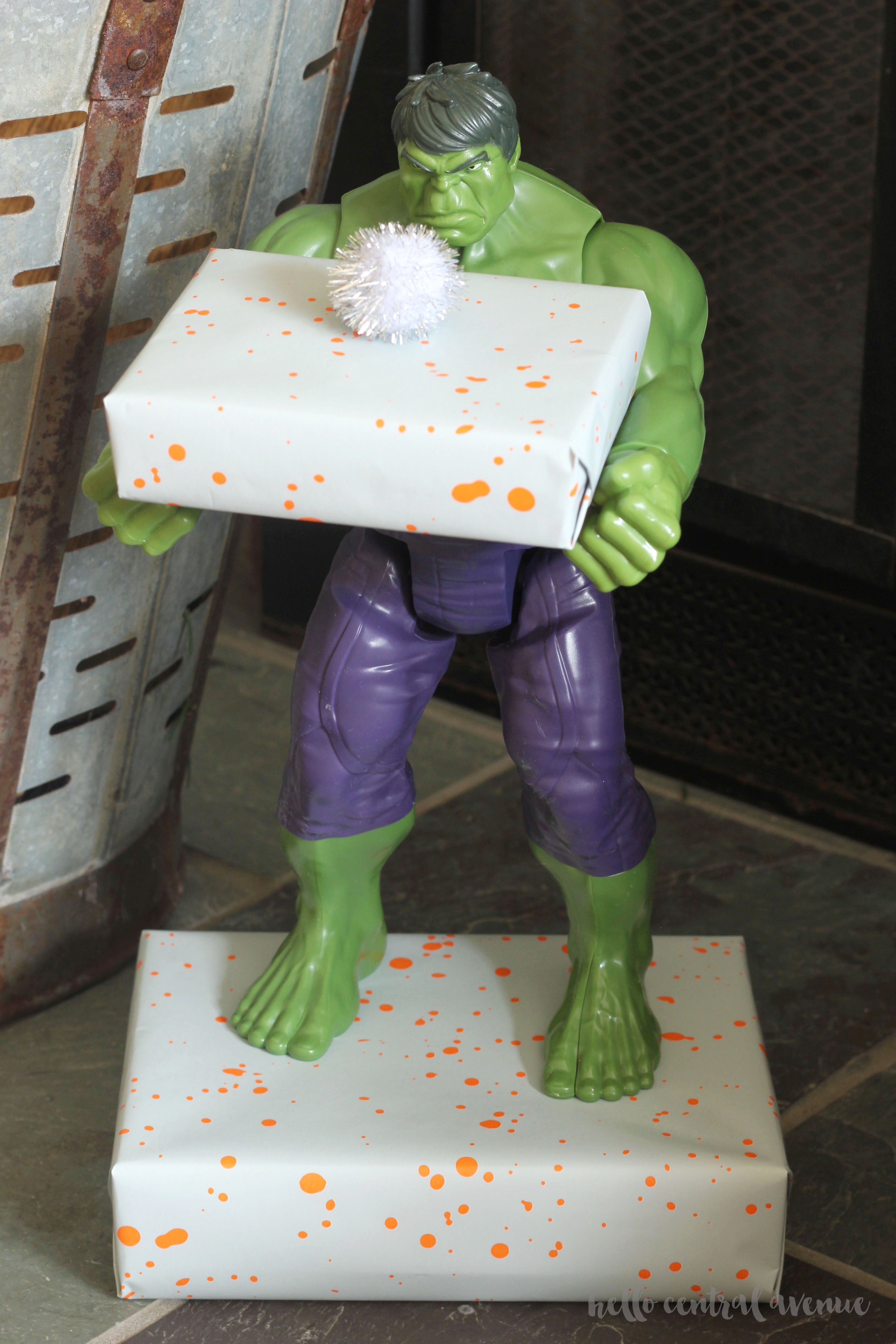 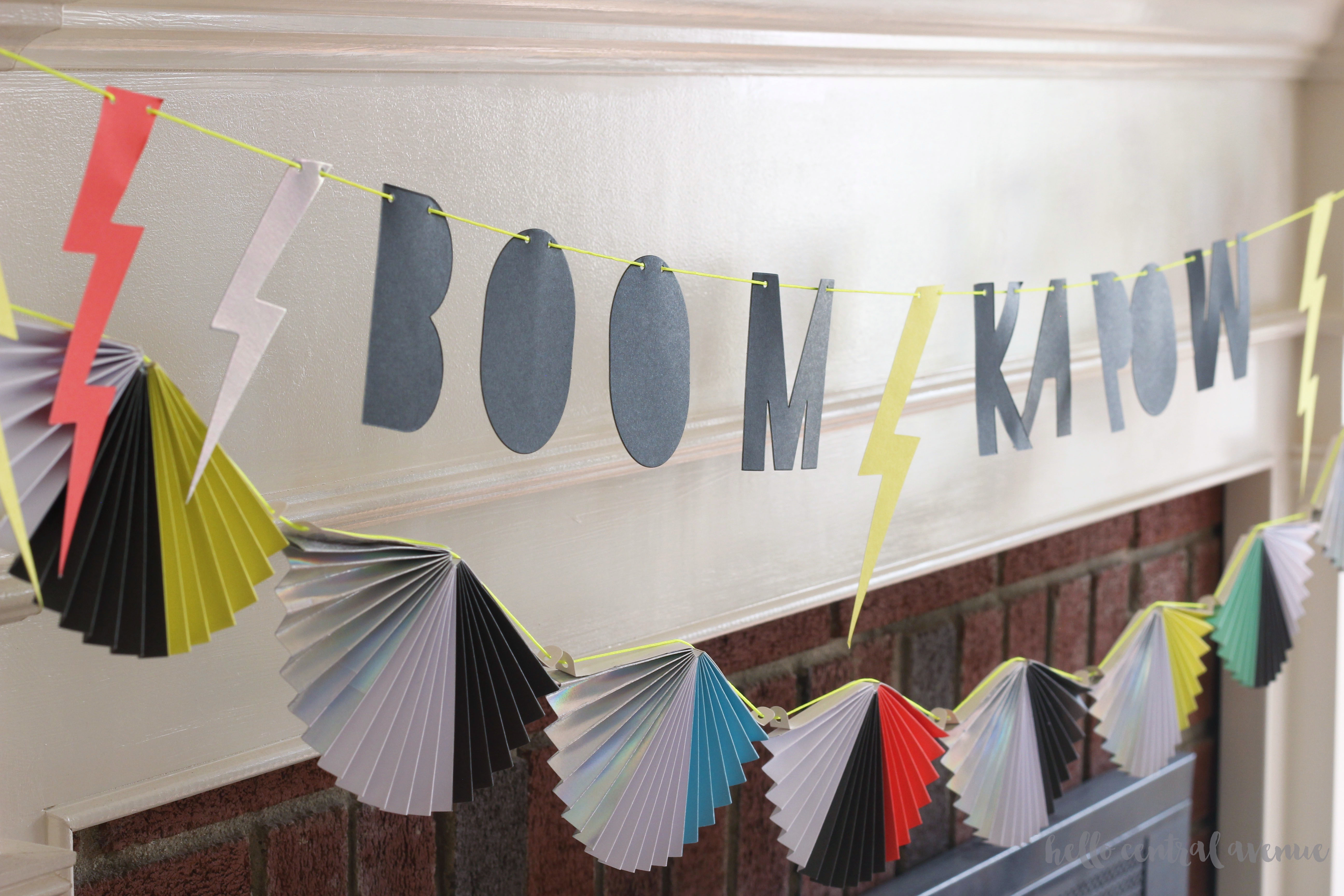 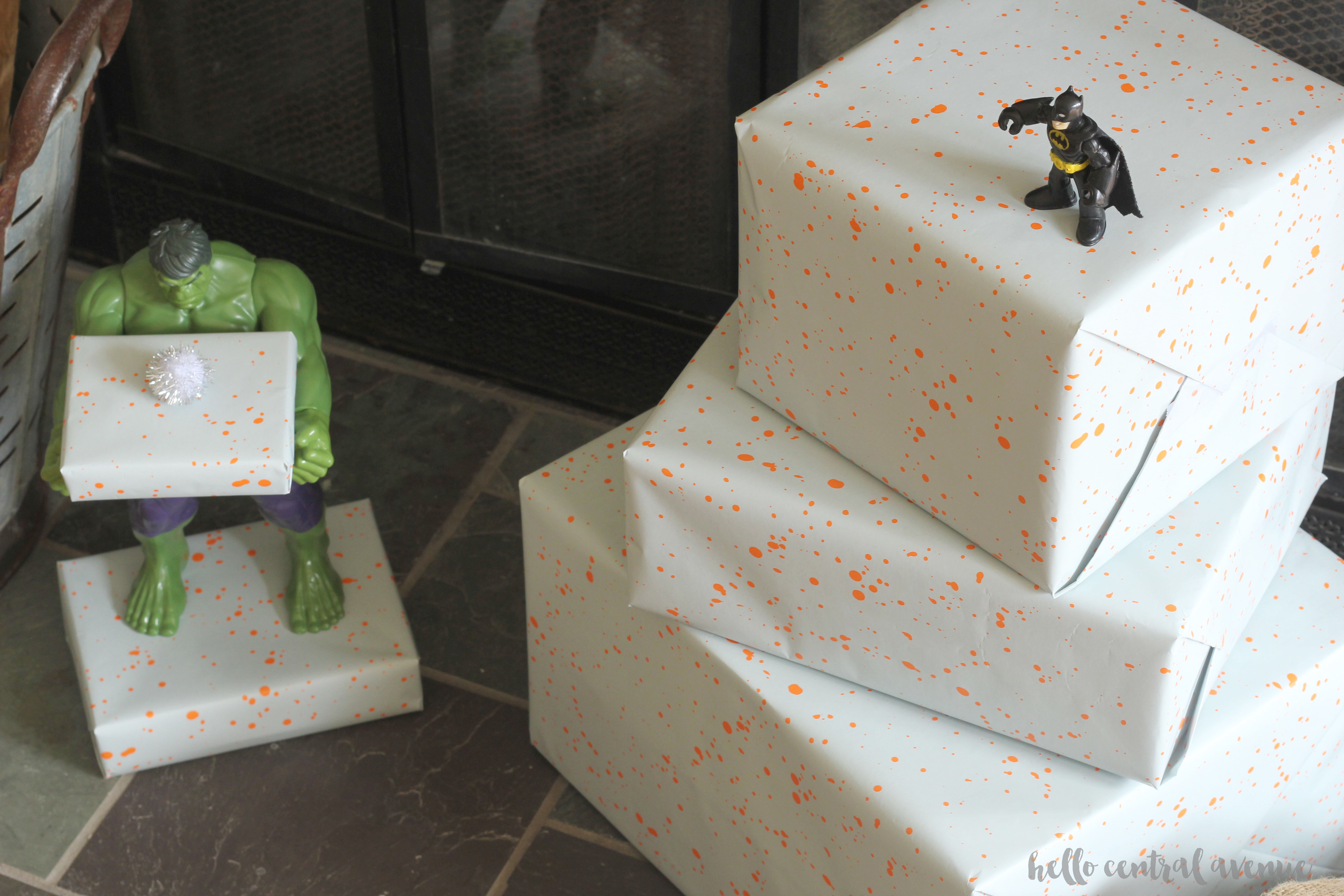 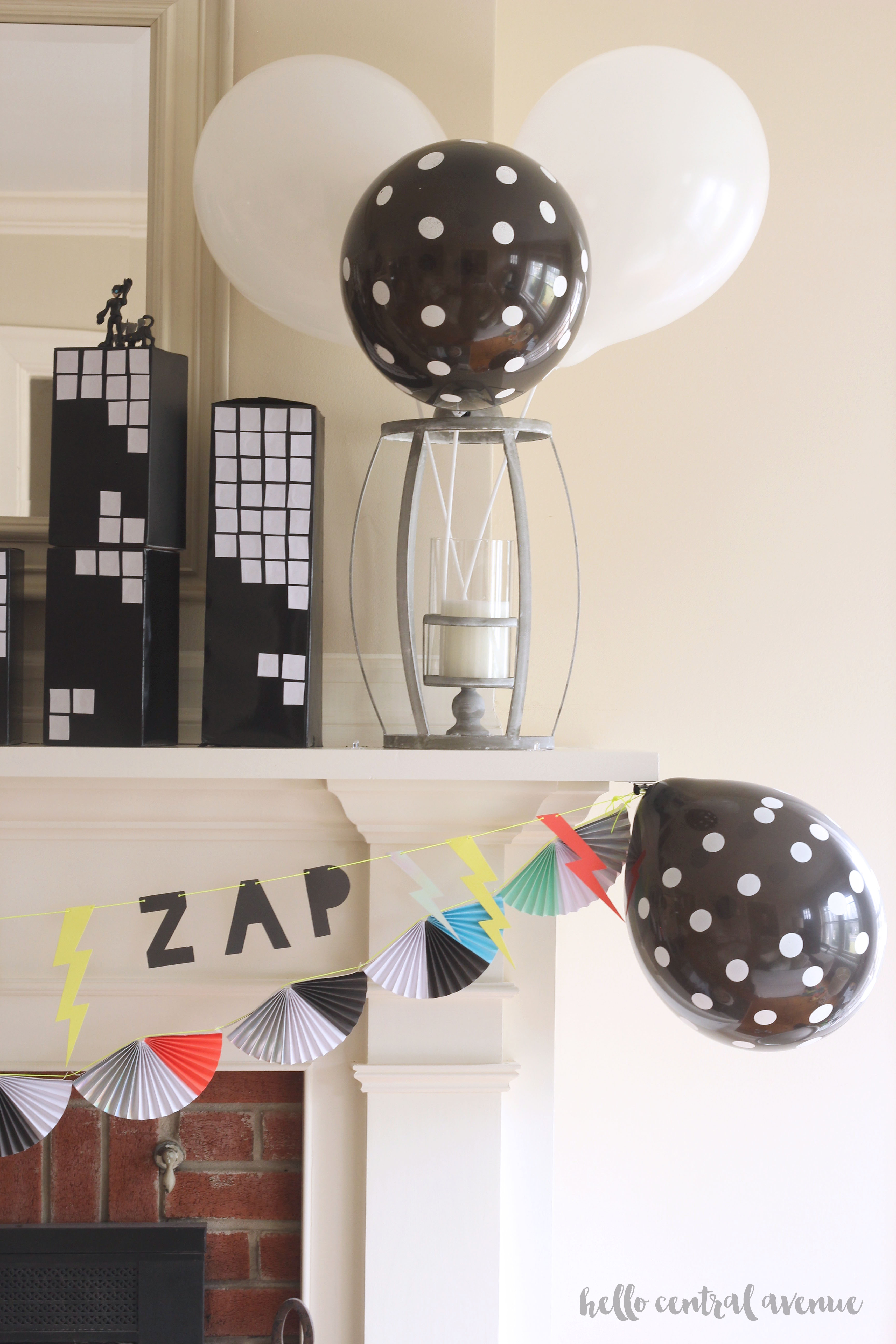 Too say I’m pleased with how the mantle turned out is an understatement!  And the most important judge of the party, my son, was “super” excited!  I completed the mantle first, and it really amped up his excitement for the party!  Let me just say that while my son definitely can get out of control when he is excited, his enthusiasm is totally contagious!

I think this superhero party mantle is classic, and could be used for a kid at any age!  Decorating for a party doesn’t have to be expensive, but you might have to put in a little elbow grease!  If you liked this post, you will probably like “Sky High Birthday Party Vision Board,” “Oh! The Places You’ll Go Birthday party,” or “Affordable and Easy 40th Birthday Party!”

If you liked this post, I think you’ll love these: 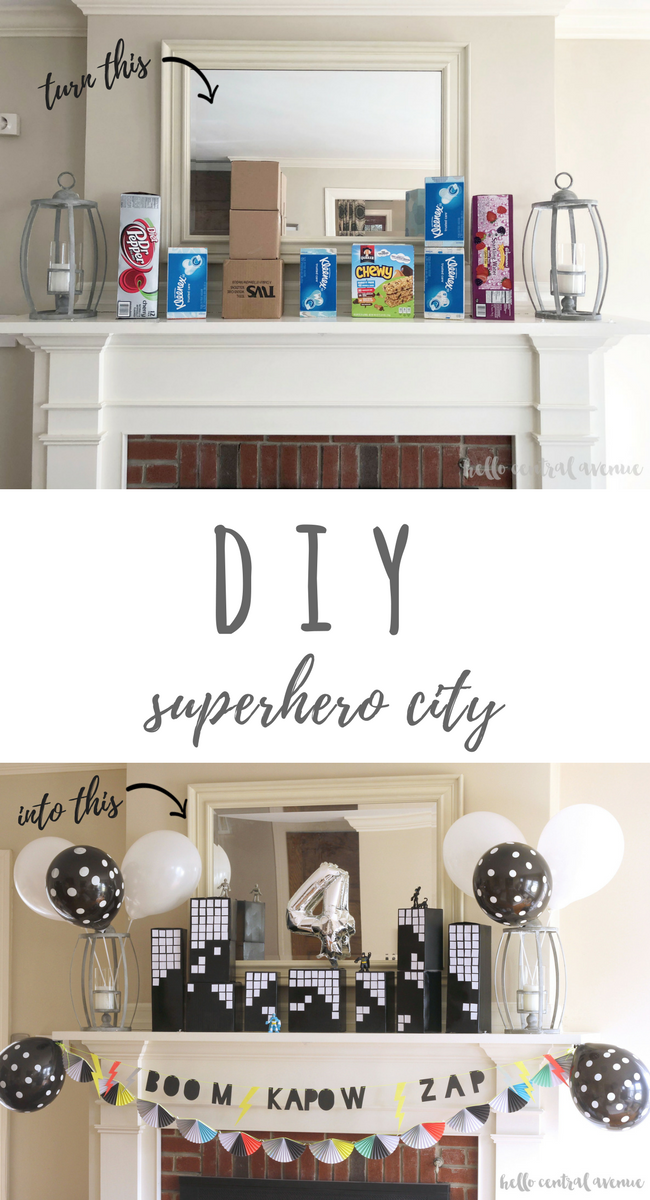 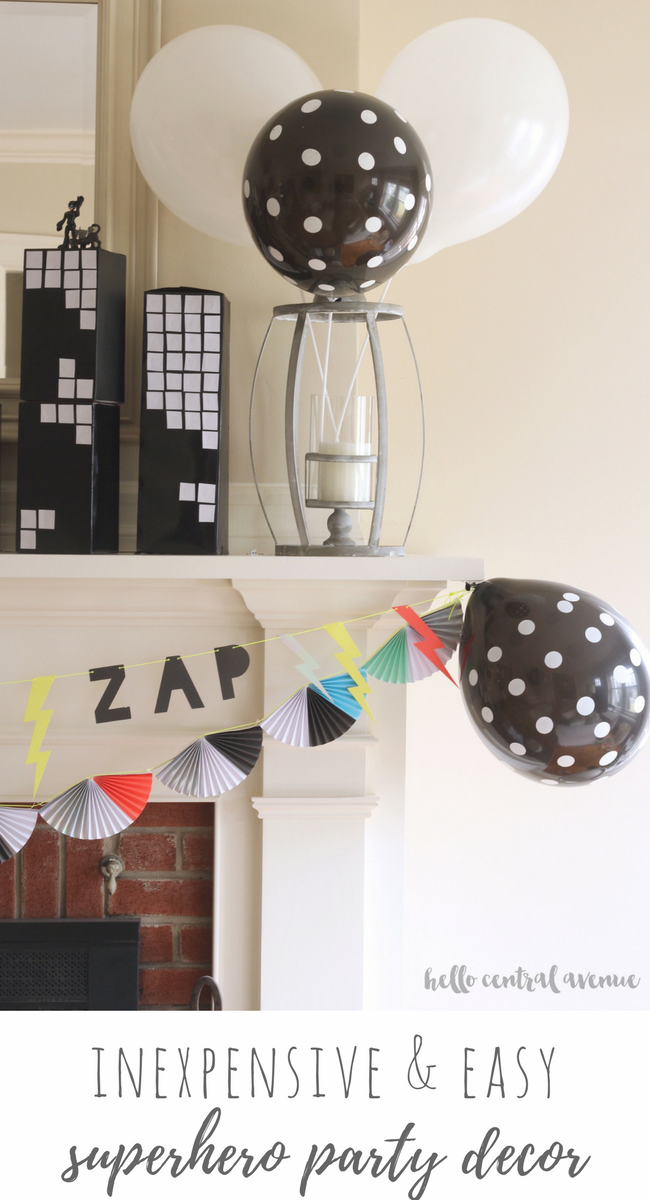 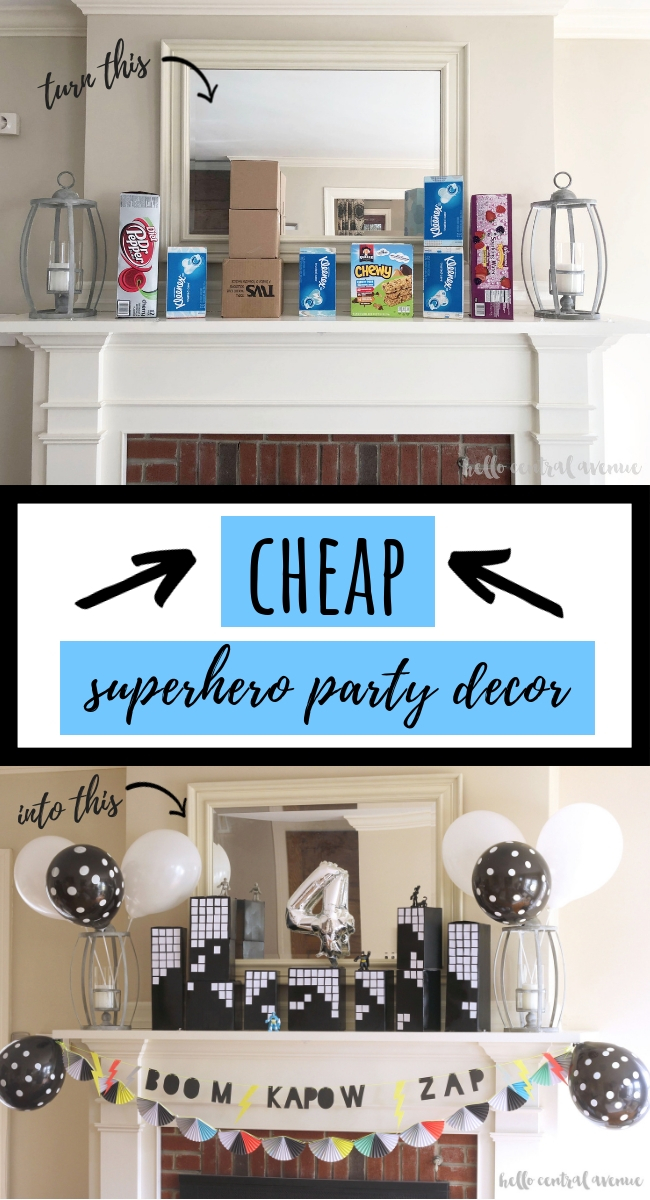