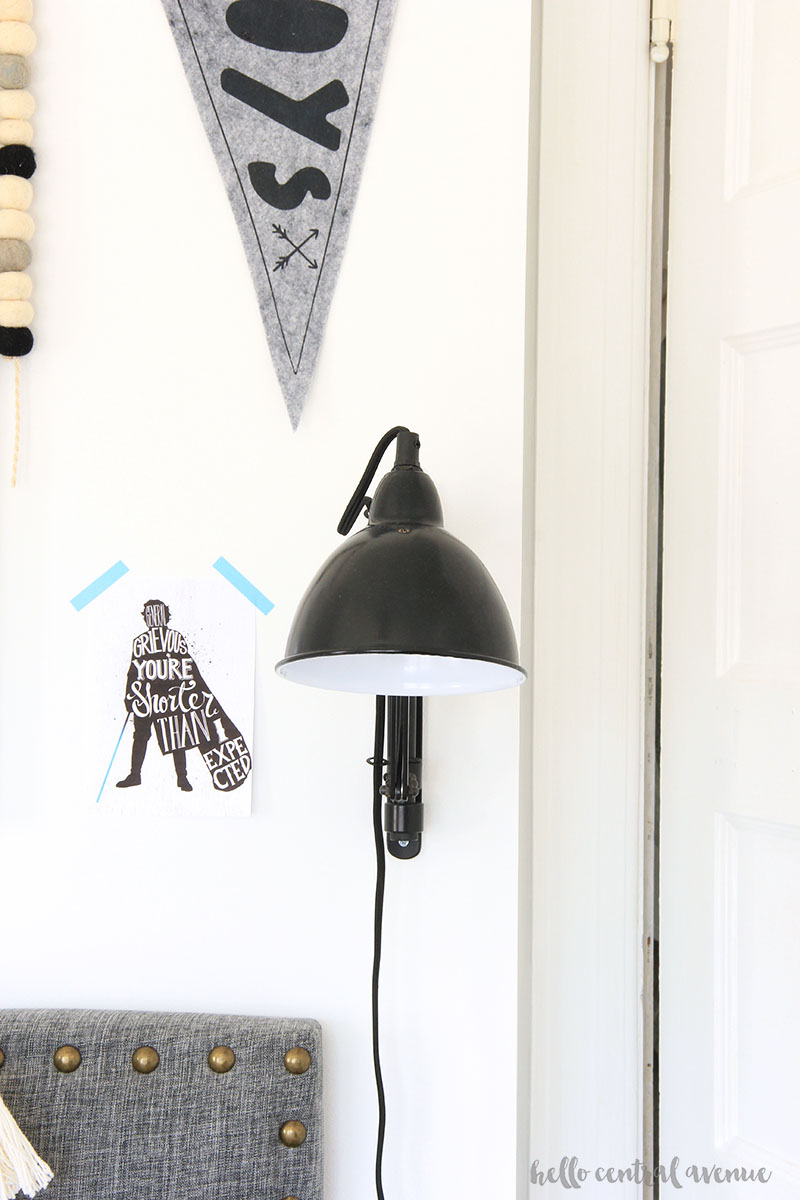 (By clicking on a link and purchasing something, you support my business and me! I use affiliate links which means that I make a very small commission from purchases you make. It costs you nothing and helps me bring you great content!) 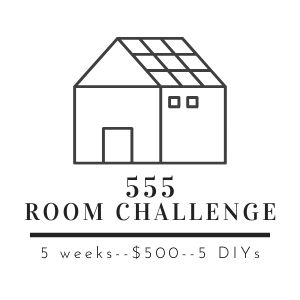 I’ve been running behind on this week’s post, because of birthday party celebrations, Valentine’s Day celebrations, and a bunch of other things! I’ve been dragging my feet with my son’s room as well!

I’m having shiny object syndrome over here! I keep coming up with new ideas that I think would be really cool in his space, but then I spend time thinking about them instead of focusing on what needs to get done!

I’m so much more careful about my hoarding tendencies these days! I still love THIS adjustable arm sconce by World Market and so does my son. It was the perfect light for his bedside area. 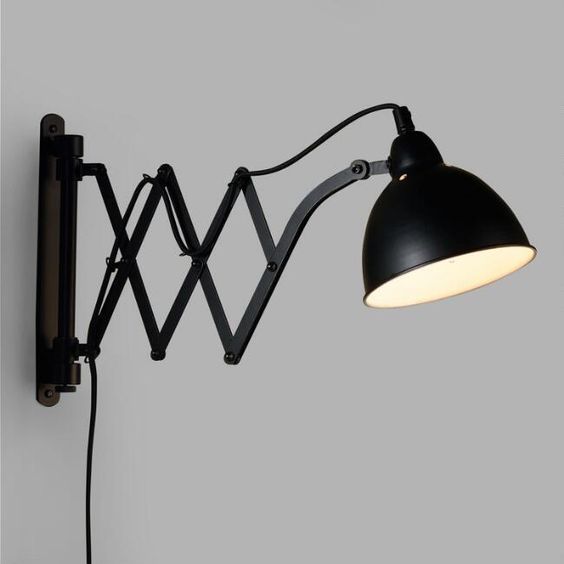 Because of his new room layout, he no longer has a side table next to his bed. I had to use a wall sconce for lighting instead of a lamp.

Way back when I bought the wall sconce, I was debating on getting a hard wired sconce or a plug in one. I looked through a billion of both kinds and thought about the pros and cons of each before settling on THIS plug in one. I’m so glad that I went this route, especially since I moved his bedroom layout!

Installation of the plug in wall sconce was super easy! It came with two anchors and screws. The wall sconce is adjustable, so that means you can pull the light further away from the wall or push is back in closer to the wall according to your light needs. My son thinks that is the coolest!

Wall sconces have always been around, but they have come a long way since the traditional brass fixtures and pleated lamp shades! Not that there’s anything wrong with that.

There are so many options out there, and they come in every style possible. Once you choose your style, you have to choose if you want a plug in sconce or a hard wired sconce. Here’s the difference between the two! 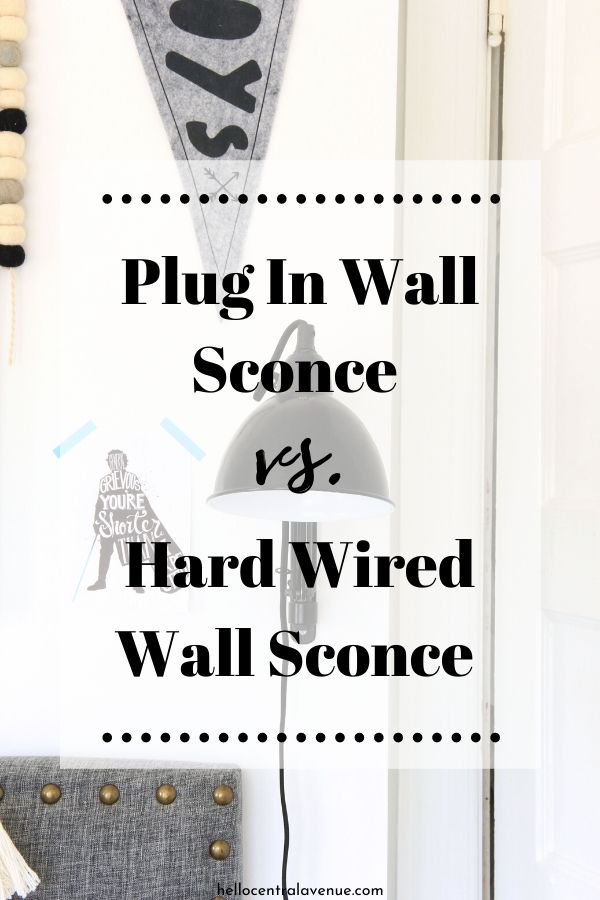 What is the difference between a plug in sconce and a hard wired sconce?

First, let’s make sure that you know what a plug-in wall sconce is! Luckily it’s not too complicated. A plug in sconce is, in fact, a wall light that gets plugged into an outlet. You attach it to a wall and run the cord straight to the receptacle. 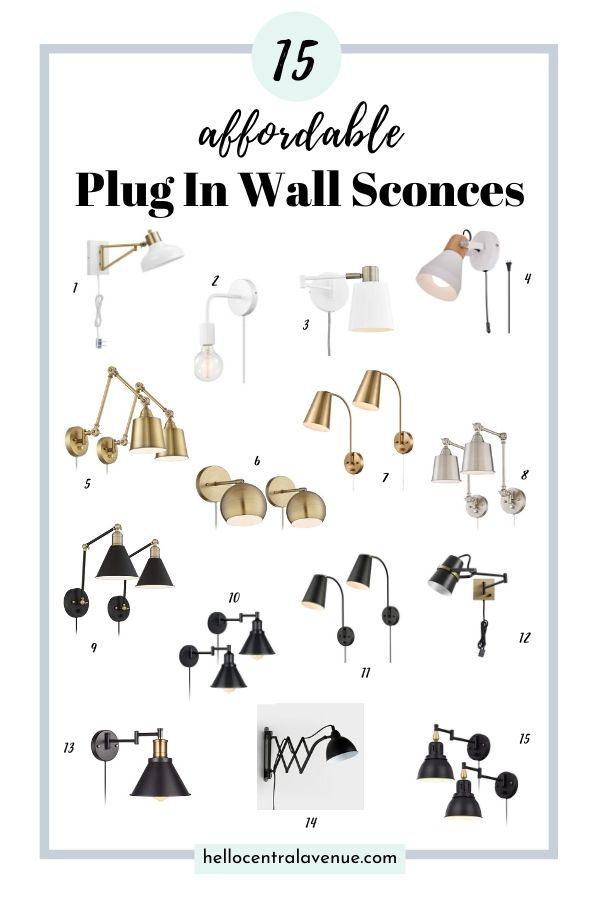 A hard wired wall sconce has to be connected to the electrical wires that run through your walls. A homeowner can do this themselves if they know how, but often an electrician is required. 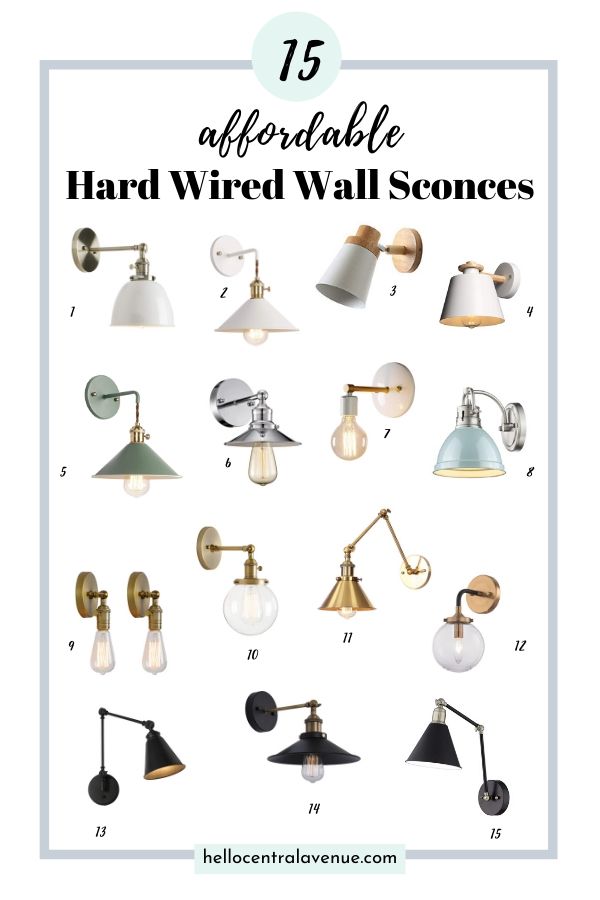 If you have fallen in love with a hard wired wall sconce, but don’t want to spend the money on an electrician, now you can use the “Nesting with Grace Magic Light Hack!”

This is a trick that blogger, Brooke Christensen, figured out when she wanted to use a hard wired wall sconce, but did not want to actually hard wire it!

She uses puck lights and either wires, glues, or velcros them to the fixtures! Then uses the remote to turn them on and off! What a genius idea!

A Plug In Wall Sconce 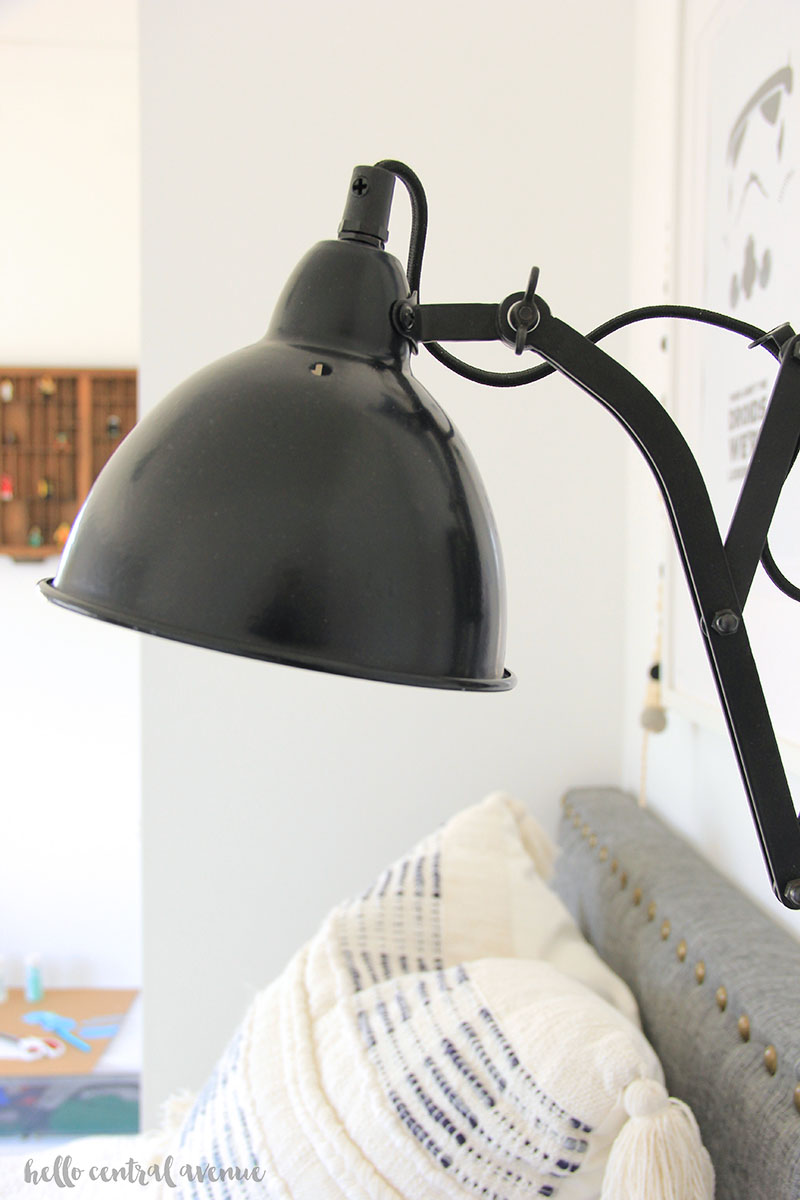 Here’s the cost breakdown for this week:

Last week I upcycled a pair of camping stools for my son’s room that I found at a garage sale for $2 total! Make sure you check them out in my post, “Upcycled Folding Stools.”

You are invited to the Inlinkz link party! 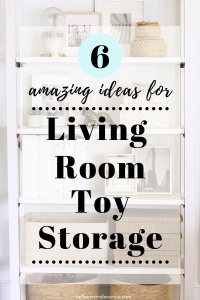 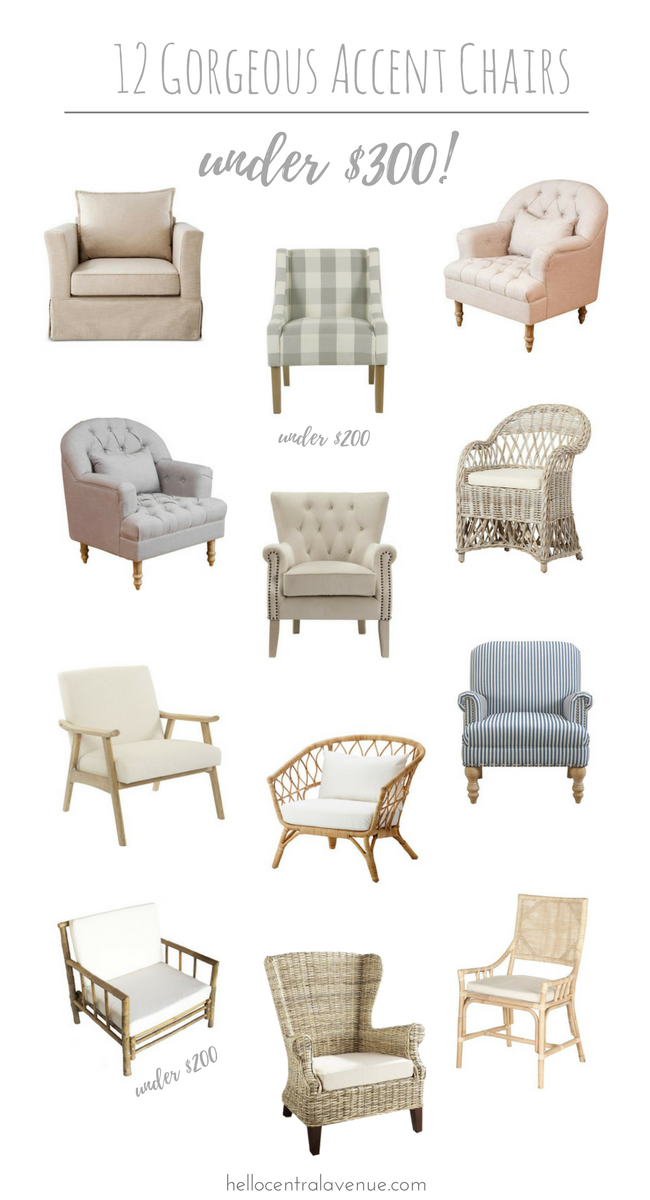 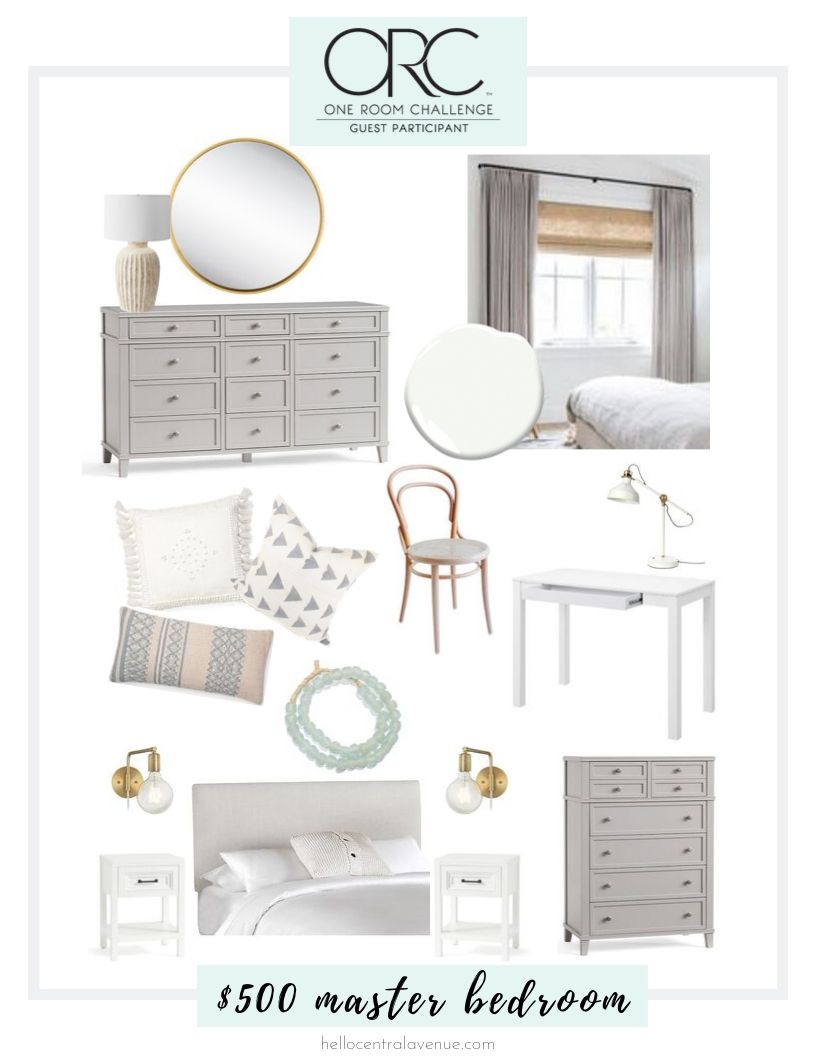 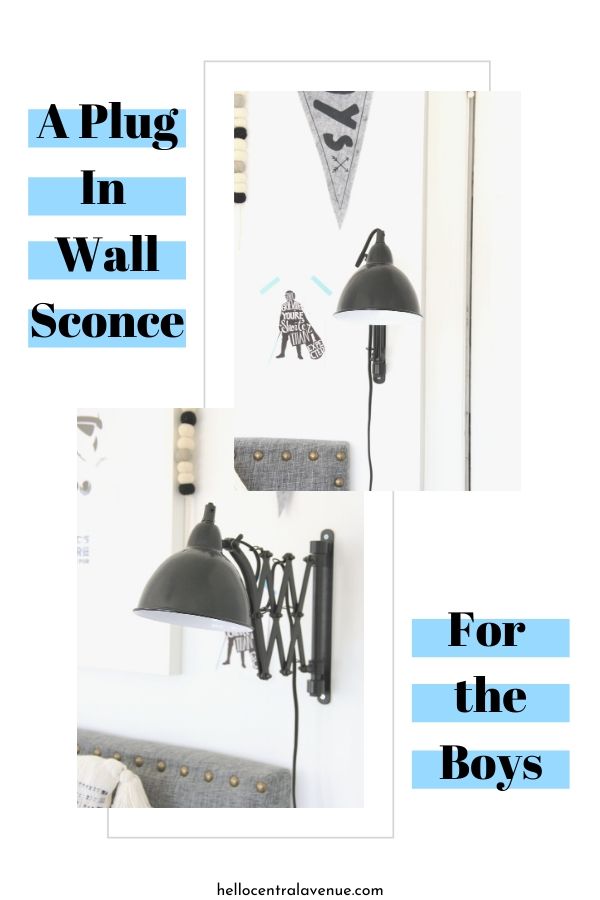 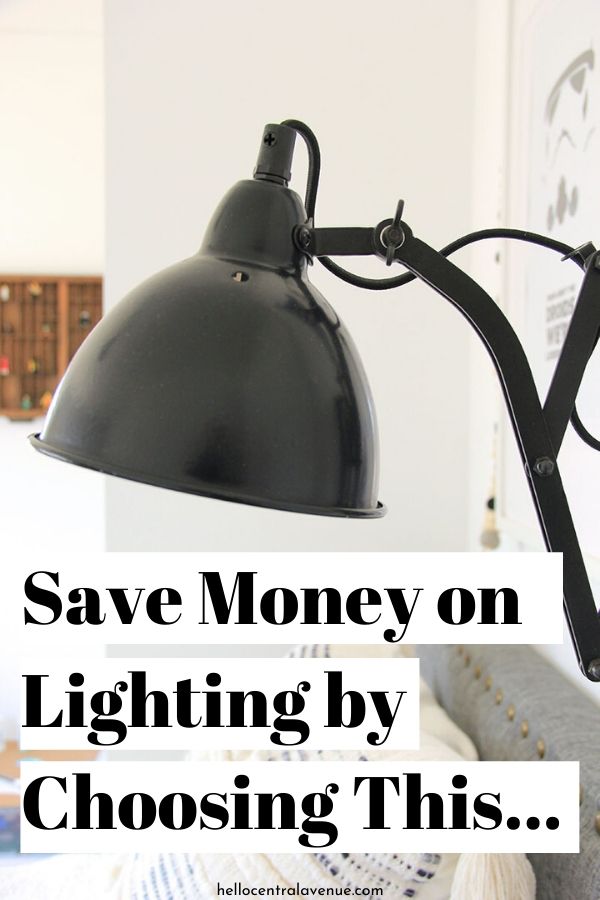 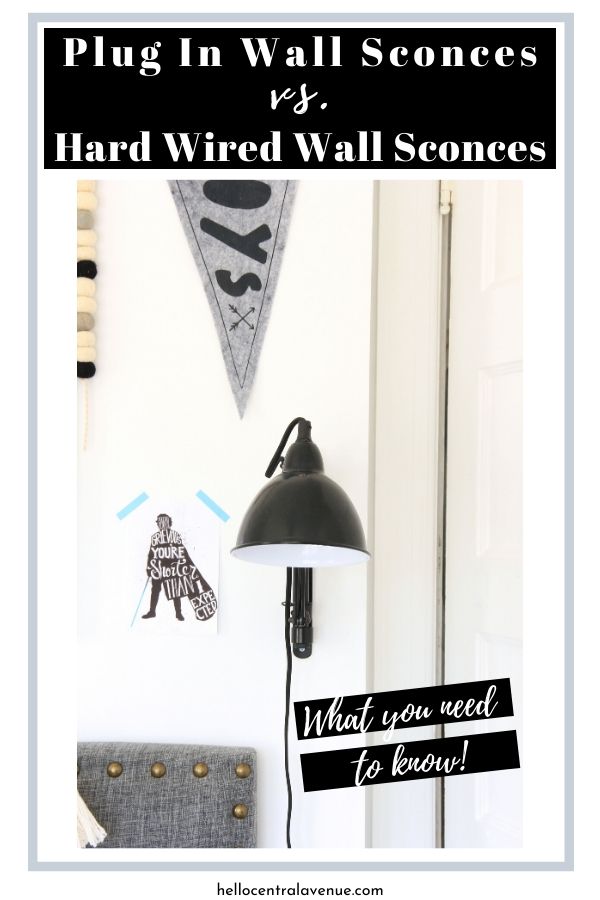